I stated in a past review that people prefer the Xbox 360 controller to the PS3's Dualshock. While this statement is controversial in regards to the fact it will always be up for debate and comes down to personal preference, it appears yet another company that makes gaming peripherals agrees. Presenting the PS3 Shadow Wireless Controller made by dreamGEAR. While the Shadow Wireless falls short of being a direct 360 controller clone, it is without a doubt a great, albeit it pricey, alternative for those looking for a different controller to use with their PS3.

One quick glance reveals that the Shadow Wireless is modeled after but does not fully copy the shape of the 360 controller, most notably the position of the analog sticks. It also markets "enhanced L2 and R2 triggers," which is nothing more than marketing talk used to reinforce the fact that it also has triggers, just like the 360 controller. All things considering, I think it is very safe to say dreamGEAR's target market is indeed people who feel the 360 controller is the better controller.

As indicated, this is a full stand-alone controller. The controller itself sports 2.4 GHz latency free wireless technology, dual rumble motors, and a built-in rechargeable battery. The wireless is achieved by using a USB port with an included dongle on your PS3. Be aware, you will need an available USB port on your PS3 itself. Not a huge deal, but if you do not have any free ports, you cannot use this controller. You will also not be turning your PS3 on and off with this controller, as it is wireless, however it is not Bluetooth.

It also features a rubberized grip shell, which I have to stress feels absolutely great in your hands. It is definitely very comfortable and feels super smooth in one's hands. 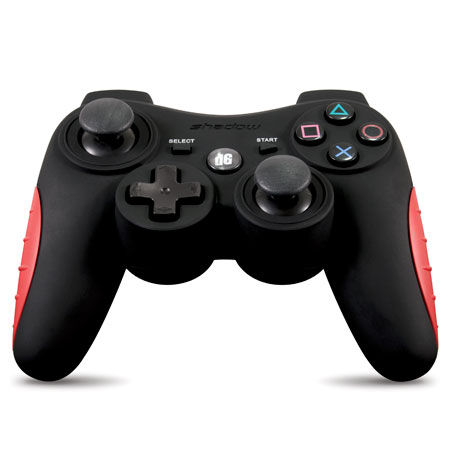 I tested the controller with a variety of games, and it performed with no major errors in every one. As such, there is no need to do a breakdown of individual games. The controller just works, and it works no issues at all. The one notable aspect that is not included in this controller, as is the case with most third party controllers, is the support for Sixaxis motion-control. Anyone who plays games that uses and relies on the Sixaxis motion-control, you will have to stick to your trusty Dualshock controller. Some may see this as a setback and a deal breaker, while many others may not have an issue with the lack of Sixaxis motion-control support as it only affects a handful of games directly.

The analog sticks, although modeled after the 360's layout, are very stiff, but not in a bad way. When I say stiff, I mean they have a large radius of movement within each stick, which does allow for more precision overall. The Shadow Wireless does indeed seem as precise as the Dualshock PS3 controller, which is only a good thing. In regards to the D-Pad, it is not the best I have ever seen. It feels a bit flimsy and not very sturdy, there really is no other way to put it and the Dualshock still has by far the D-Pad to beat. With that said, I doubt many people if any at all would be buying this controller for it's D-pad, but it is worth noting there are definitely better alternatives for the D-pad.

The Shadow Wireless does include TouchSense® Technology licensed by Immersion, and in simple terms this means it has great rumble support. The rumble truly is strong, and a great addition indeed.

Finally, I have to stress one last time, do not feel like you will be getting a full fledged carbon copy of the 360 controller, as this controller does not have long triggers like the 360 controller. The marketing materials do tout Enhanced L2 and R2 buttons, however they are not full-fledged triggers. If you have ever seen the Real Trigger plastic add on for the PS3, the Shadow Wireless is virtually the same as those. The triggers as a result are essentially the same size of the current L2 and R2 buttons, but they do have a small lip on the bottom of them, creating smaller "mini" triggers so to speak. 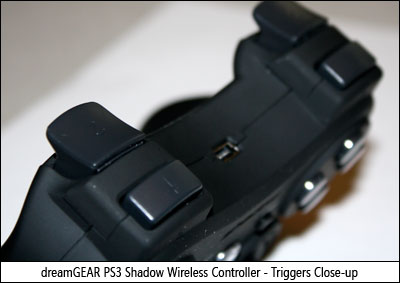 ConsOverall, if you are in the market for a controller that is like the 360's to use on your PS3, this is a fine choice. Although it does not exactly mimic the 360 controller, it comes fairly damn close. It's a nice looking and extremely comfortable controller that is wireless (via USB dongle controller). It works just as it should work, no issues at all, and compared to other third-party controllers I have checked out and used, it is without a doubt high on if not at the top of the list. However, I just wish it was a bit less expensive, as currently it is listed as $54.99 on their website. While I am sure it can be found for less with some online hunting, I have always been of the belief third party controllers should never cost more than the official controller unless they sport some amazing new features.