In August 2009, Netscape founder Marc Andreessen announced he was returning to the world of browser development, more than a decade after Internet Explorer forced him out of the market. At the time, he hinted his new project, under the guidance of Eric Vishria and Tim Howes, would be different.

Fast forward 15 months, and RockMelt has arrived in beta form, promising to seamlessly integrate social networking into the browser. According to the project's official blog, the mantra behind RockMelt is ''Your World Built into Your Browser''. Already, it's been compared to social browser Flock, which despite its developers best efforts hasn't yet managed to become widely accepted.

So, does RockMelt deliver the goods? Firstly, it's important to preface any impression of RockMelt with this: if you hate Google Chrome, you won't get any joy from RockMelt. That's because the new browser is built on Chromium, making Chrome and RockMelt effectively brothers. That also means the core browsing experience is the same, along with the minimalist UI, universal URL bar and extensions. Chrome's speedy browsing experience is also along for the ride, with pages loading in a snap, and Incognito browsing is also included.

But from the beginning, it's clear that this is Chrome, with a difference. The first clue comes after installing, when the user is presented with a Facebook Connect window and asked to enter their Facebook credentials. Don't want to share that information? RockMelt will start without a Facebook account logged in, but the result is effectively a lightly-skinned version of Chrome.

Pass that hurdle, and you're greeted with the start screen. The first time you start RockMelt, the start screen acts as a guide of sorts, pointing out the browser's various features. From then on, the start screen reverts to the Chrome default of providing access to recently visited sites. 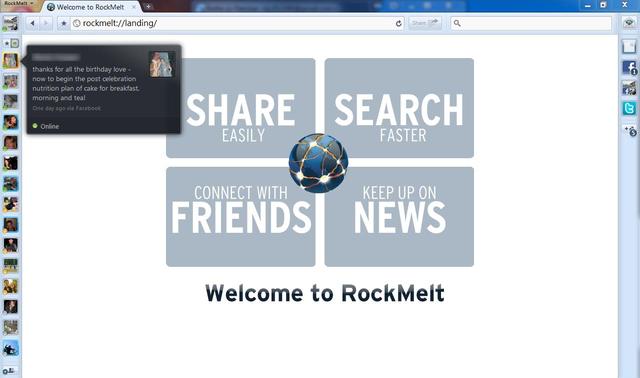 As the RockMelt team have gone to great pains to point out, their browser is about the social networking experience, and that's where ''Edges'' come in. Effectively sidebars to the left and right of the main browser window, Edges provide access to Twitter, Facebook and RSS feeds. Using the left-hand Edge, the user can access Facebook Chat, update their Facebook status or tweet. Users can also check out their friends' recent Facebook updates and any interactions they've had with them.

Active Facebook chats pop-out into seperate windows, while a well-hidden button to the bottom-left of the window provides access to a full list of Facebook contacts - handy, since the default view, which uses Facebook profile pictures to represent each of your friends, can make it tricky to find the person you're looking for.

Using the right-hand Edge, users get one-click access to their Facebook news feed and notifications, as well as their Twitter feed. Photos posted in tweets appear in the feed, which is a nice touch, and Facebook users can post comments and ''Likes'' without switching windows. Both Facebook and Twitter are supposedly updated continuously in the background, though in practice, there was often a gap of several minutes before new Facebook notifications appeared - something to remember if you simply must live on the cutting edge. RSS feeds can also be added here, though there appeared to be no way at this stage to add extra services like Flickr or YouTube. On the plus side, multiple Twitter accounts can be added and actions like retweeting and replying are available from within the Twitter feed.

For those who like their browsers especially lean, Edges can be hidden. 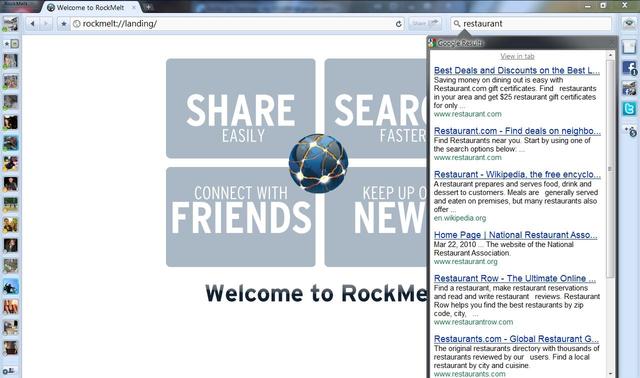 As any true Facebook or Twitter addict would know, social networking just isn't fun unless you can get your friends in on the act. The solution, according to the RockMelt team, is to build URL sharing right into the browser. The most obvious sign of this sits to the right of the URL bar, in the form of the aptly-named ''Share'' button. Found a website you want the world to know about? Open it up in RockMelt, hit the share button and you can post it to your Facebook wall, or send it out in a tweet. Users can also share with individual Facebook friends by dragging the URL onto their display picture in the left-hand Edge - from there, options appear to share via chat, message or as a wall post.

Search also gets an overhault in RockMelt. While users can still start a Google Search from the URL bar, the familiar search box to the top-right of the window has been tweaked, with a preview of search results appearing in a drop-down list. While this sounds like a good idea in theory, the lack of space in the drop-down menu can prove frustrating, and many users will likely take up the offer of opening search results in a new tab.

The RockMelt team has claimed their browser is truly portable, with bookmarks, preferences and any other personal touches you add copied to RockMelt's servers, with the aim of making that information available wherever you happen to log in using a copy of RockMelt.

RockMelt has said web searches and browsing history are not saved to the cloud, and any information sent to RockMelt's servers is encrypted, though it remains unknown if the company can access the data at will.

So is RockMelt the browser social networking addicts have been waiting for? In short - not yet. While RockMelt isn't a quantum leap, and it isn't the revolution we were promised, it's a step in the right direction, and provides the best attempt yet at a ''true'' Facebook experience without having to open up the full site.

But it is just an attempt, and a lack of access to Facebook features like events, applications (no FarmVille!), groups and even messages means you'll find yourself browsing to Facebook.com to get your social networking hit more often than not. Twitter integration is more full-fledged, although there appeared to be no way to manually refresh to get the latest tweets.

RockMelt's approach to cloud synchronisation, while brave, is likely to draw fire from privacy advocates, and also assumes that the user will have RockMelt installed on every computer they use. In the case of many corporate employees, software restriction policies will make that impossible, thereby removing much of RockMelt's appeal. Those who regularly access the internet from web cafes or friend's homes will also be out of luck.

As Zdnet's Phil Wainewright has pointed out, RockMelt's funcitonality may have been better suited to a cross-platform plugin or addon, rather than a fully-fledged browser. Many of RockMelt's functions can already be replicated by installing Chrome addons, with Lifehacker providing a detailed guide.

The rise of mobile access to social networking - Facebook earlier this month revealed that 200 million users now access Facebook from a mobile phone - will also pose a threat to RockMelt as it attempts to establish a foothold in the competitive browser industry.

The fledgling browser is still in beta form, but it appears RockMelt has a tough fight ahead if it is to avoid going the way of Marc Andreessen's last foray into the world of web browsing.