SkyDrive is already a pretty robust cloud storage solution as provided by Microsoft, but if the latest rumor is to be believed then more features are on the way. LiveSide has been digging around in the current website source code for SkyDrive and uncovered some references to a "MusicPlayer", hidden in among other relatively unexciting lines of programming.

As well as the references to a SkyDrive cloud music player, LiveSide obtained some assets for such a feature from an internal testing version of SkyDrive (believed to be version 17 (Wave 6)). 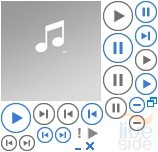 Chances are this feature, if it is in fact coming to SkyDrive, will be tied in with Microsoft's existing Xbox Music service. Back when the service was officially launched in October, Microsoft said that a cloud storage solution would be coming to Xbox Music, where you could upload basically any music you own to your "Xbox Music cloud catalog". The cloud storage feature will go beyond a scan-and-match service as you will be able to upload and access music "even if it’s not available in the Xbox Music catalog".

It's possible that this Xbox Music cloud storage service would be powered by SkyDrive, and it would make sense as uploading music would have to use up some sort of online storage space quota; what better space than SkyDrive? Having two different areas to upload (one for standard files, and one for music) would fragment Microsoft's personal cloud storage space, so it would be better having them as one through SkyDrive.

Rival services such as iCloud and Google Play Music allow users to upload their own music to the cloud for streaming to personal devices, and as we've seen from evidence above, a SkyDrive-powered Xbox Music equivalent is surely in the works.