It seems the Windows Phone Store update that rolled out yesterday brought an unexpected feature along with it, the ability to install apps from an SD card.

Until now users could only download apps from the Store, so this is something completely new in the Windows Phone universe. There wasn't any mention of such a feature until now, but luckily for us Microsoft’s handy How To page gives us some details on the process. 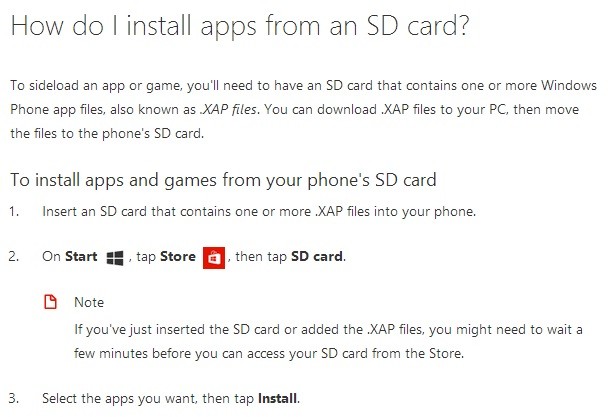 Users will still need to download the .xap files from the store and then copy them to an SD card. Once the SD card is inserted in the phone, users will be able to access and install the apps via a special section in the Store application. There are some limitations though: the applications must be up to date, older apps will not be available and they will show up under "Incompatible apps".

There are also some limitations regarding price: all free apps will be installed directly, all paid apps and games that have trials available will be installed as a trial with the option to buy later, and all paid apps will need to be purchased before they can be installed. Even though it's not mentioned, there will certainly be another limitation: availability in the user's region. If the user has a .xap file that isn't available in his region he will not be able to install it.

All in all this is a pretty sweet new feature, especially considering it's something unexpected. If you change or reset your phone often, and you want to have your basic apps all in one place than this will go a long way in helping you out.

What do you folks think? Is this something you will be using?