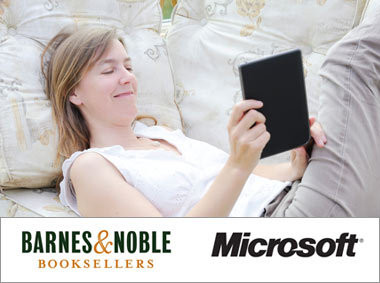 Microsoft has reportedly offered to buy most of Barnes and Noble's Nook Media subsidiary, which includes its Nook tablet and eReader business, for $1 billion. The news comes from TechCrunch, which claims it has obtained internal documents on this acquisition plan.

The article states that the deal would not cover Nook Media's college textbook division. Instead, Microsoft would buy out the eBook, eReader and tablet portion of the business. TechCrunch also claims that Nook Media plans to discontinue the Android-based Nook tablets by the end of the company's 2014 fiscal year, which would end in late April 2014. Instead, Nook content would be offered via apps that would run on third-party hardware.

Microsoft and Barnes and Noble announced their partnership with to form what would later be called Nook Media in April 2012. Microsoft invested $300 million in the business and currently controls 16.8 percent of Nook Media. However, the only tangible portion of this partnership on Microsoft's side was the launch of the Nook eReader app for Windows 8 in fall 2012.

If Microsoft does end up buying most of Nook Media, it would certainly be a crushing blow for Barnes and Noble, which has been trying to compete with its major rival Amazon.com in the eReader business. Neither Microsoft nor Barnes and Noble have commented on this new report.