Once upon a time, Apple users had .Mac for their cloud computing needs. It wasn't known as the "cloud" at the time, but it had the staples of synchronizing data with the cloud - email, calendars, bookmarks, and personal web space. Following the rise of the iPhone and the iPod touch, MobileMe took over .Mac in July 2008, and in addition it extended bits of the service to Windows users. Now that we're hearing a few whispers of a new music locker for iTunes and additional cloud-enabled features for Mac OS X Lion, it may be time for a new name and a fresh start for this service. Is it "iCloud?" After all, a few days ago a site named iCloud switched their name to "CloudMe."

The answer: maybe. But we do know what it's known as for now during Lion's development: "Castle." 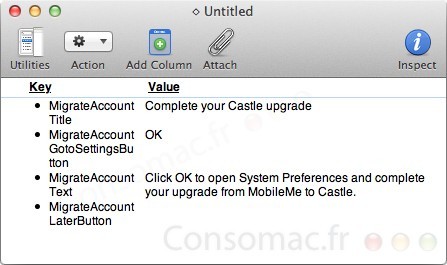 According to a French blog Consomac (via TUAW), the name Castle was discovered while they were sifting though developer builds of Lion, finding evidence of both the iCloud name and a "Find My iPhone/iPod touch" equivalent for Macs. The most telling string is for a button to "complete your upgrade from MobileMe to Castle."

We should know more about iCloud next month at Apple's Worldwide Developers Conference. In particular, would MobileMe users have to change their @me.com email addresses again, after doing it once for @mac.com?

Update: As pointed out in the comments, "Castle" is the codename, not the product name.