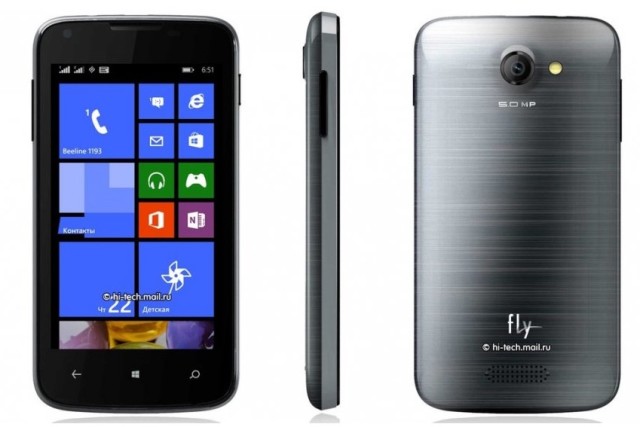 A Russian OEM, called Fly, is about to release a low-end Windows Phone with the highly attractive price of $112 (3990 Rubles) which will give Windows Phone fans in that part of the world another entry-level option alongside the popular Lumia 5XX series handsets. The phone, called the Era, will be cheaper than the Lumia 530, which will have a price of 4990 Rubles in Russia.

The device will have a 4-inch WVGA IPS display, quad-core Snapdragon 200 CPU clocked at 1.2 GHz, Adreno 302 GPU, 512 MB of RAM and 4GB of internal memory and of course a microSD slot too.

A key differentiator with the Era over the Lumia 530 is that this phone will have a front facing camera, VGA; both devices have a rear camera and the Era sports a 5MP shooter. The device has a 1500 mAh battery as well.

It's becoming quite clear that Windows Phone is becoming more attractive to vendors since Microsoft has cut the royalty for using its software. While these low end devices may appeal to power-users, they do help build a base of users for the platform and build brand recognition with consumers. With a larger base, the platform becomes more attractive to developers who will then work to keep their apps on parity with iOS and Android.