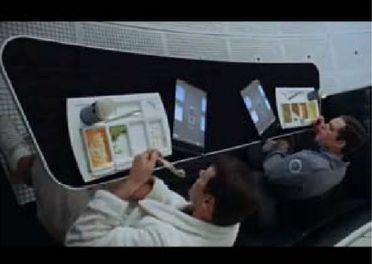 Apple and Samsung are currently in a major legal battle over patent disputes that could keep Samsung's smartphones and tablets from being sold here in the US. In July, Apple asked the US courts for an injunction to prevent devices being sold in America; including Samsung's Galaxy Tab 10.1 tablet. Now, it looks like Samsung has offered a defense against Apple's proposed injunction and according to a post in FOSS Patents Samsung is using a classic sci-fi movie as one of its defense points.

The movie in question is 2001: A Space Odyssey. Released in 1968, it is still named by some movie critics as the best science fiction film ever made. Directed by Stanley Kubrick and written by Kubrick and Arthur C. Clarke, the movie depicts man's fictional contact with an unseen alien species from prehistoric times to the "near" future (at least near in 1968). Part of the movie takes place on board the Discovery, a spaceship making a trip to Jupiter.

Its this part of the movie that has a sequence that Samsung is using in its defense. We see astronauts David Bowman and Frank Poole having some dinner and watching what looks like a flat screen video display. The display seems to double as a computing device. According to Samsung's description, "[...] the tablet disclosed in the clip has an overall rectangular shape with a dominant display screen, narrow borders, a predominately flat front surface, a flat back surface (which is evident because the tablets are lying flat on the table's surface), and a thin form factor."

Basically, Samsung is saying that Apple's iPad design (which Apple claims Samsung is infringing on with its Galaxy Tab 10.1 tablet) was in fact was inspired by the tablet devices depicted in 2001: A Space Odyssey. On one hand, the devices in the film do have some resemblance to modern tablet PCs which is remarkable for a movie released over 40 years ago. However, on the other hand one does wonder if a court would take Samsung's defense seriously.