Google+ launched in late June of this year to much fanfare and delight from curious social mediaites worldwide. The service, which Google deems a new "social project," remains invite-only, but continues to experience rapid growth amongst users looking for an interesting and fresh alternative to Facebook. The latter continues to dominate the social media space with 750 million active users.

In Google+'s first month, some users speculated over the inevitable fall of Facebook, citing the site's triumph over MySpace as an example of what will eventually occur - but in reverse. Unfortunately for those users, reports of Facebook's quick demise have been grossly exaggerated. That is, according to this report from comScore (via TechCrunch). 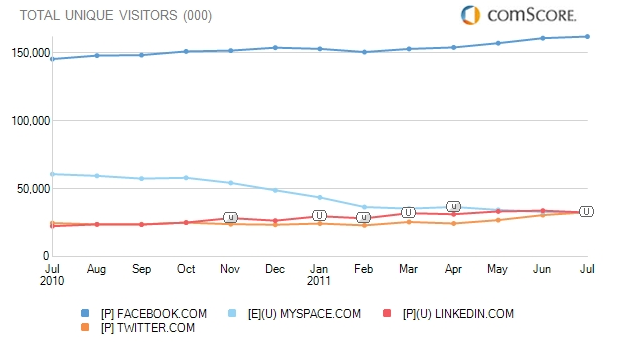 Both Facebook and Twitter set records last month, with growth at similar rates over the previous month. With such growth rates, the networks appear to complement each other with their own niche of uses rather than acting as direct competitors.

Meanwhile, the business-oriented LinkedIn and the former kingpin of social media, MySpace, experienced a slight loss over the same time period. MySpace continues to bleed users by the millions month after month.

Whether Facebook will align on the same slippery slope as MySpace remains to be seen. This question may be better answered upon Google+'s exit from beta status, but for now, Facebook's new record of visitors deserves a "Like" from its executives.