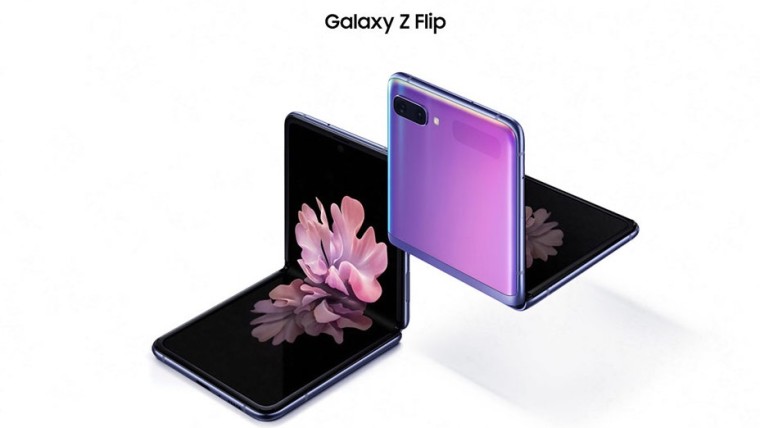 Samsung has announced its second foldable device at Unpacked 2020, the Galaxy Z Flip. The device has a clamshell form factor akin to the foldable Motorola Razr.

The Galaxy Z Flip features an Infinity Flex Display with a Dynamic AMOLED panel. While it is not a high refresh rate panel, it is flexible which allows the device to be folded into half thereby making it easier to carry. When flipped open, the foldable display measures 6.7-inch. Samsung is also boasting of the fact that the Galaxy Z Flip is the world's first foldable smartphone to ship with a foldable cover glass as well. This is important since the Galaxy Fold ships with a thin plastic layering on top of the flexible display which gets scratched easily.

The Galaxy Z Flip can be unfolded in free stop angles which means one you use the bottom half of the device like a tripod while taking selfies, using the rear camera, or when on video calls. When unfolded into half, the Flex Mode is activated to ensure UX controls are placed at the top or bottom of the display. Samsung has worked exclusively with Google to develop the Flex mode. This feature can also be used to run two apps simultaneously.

There is also a small 1.1-inch cover screen on the exterior of the Galaxy Z Flip that can be used to view the time, date, and see unread notifications. It can be activated with a simple tap.

Unlike the Galaxy Fold, the Z Flip does not pack flagship-level internals. Instead, it features the older 7nm Snapdragon 855 chipset, 8GB RAM, and 256GB storage. It also does not feature the same fancy camera system of the Galaxy S20 but features dual-12MP cameras, with the primary sensor featuring an f/1.8 aperture and OIS. The secondary 12MP camera offers a 123-degree wide FoV. There is also a 10MP f/2.4 selfie camera on the Z Flip.

The unique design of the Galaxy Z Flip means it comes with dual-batteries inside with a total capacity of 3300mAh. It also only supports 15W fast wired charging which is on the slower side, though it does pack wireless charging and reverse wireless charging. Other specs include 4G LTE connectivity, Wi-Fi ac, Bluetooth 5.0, NFC, and dual-SIM connectivity. The fingerprint sensor is integrated into the power button. The device misses out on 5G, microSD card slot, and stereo speakers among other things. The phone runs on Android 10 with One UI 2.1 on top of it.

Samsung will be offering the Galaxy Z Flip in Mirror Purple, Mirror Black, and in Mirror Gold color in selected countries. It will go on sale starting from February 14th with a price tag of $1,380 in the United States and Korea followed by other markets.