Hot on the heels of its first Windows Phone 8 handset, another Samsung device has been outed today. The 10.1-inch ATIV Tab will be the company's first Windows RT device, and is expected to be officially revealed this week at IFA 2012. 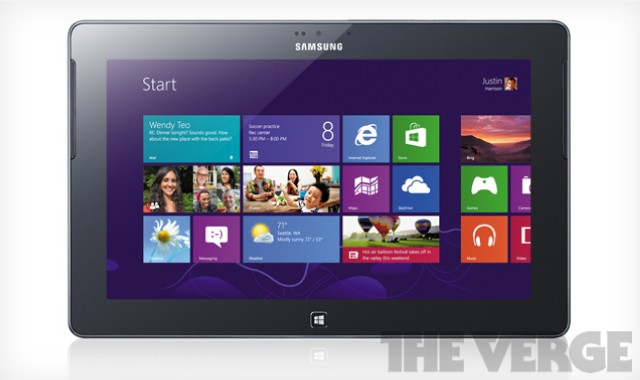 Like the new ATIV S Windows Phone 8 handset, the ATIV Tab features a dual-core 1.5GHz processor. The Verge cites "sources familiar with the company's plans" in revealing that the new tablet will weigh around 570g, and that its body will be just 8.9mm thick.

The device will include both a USB and a uHDMI port, along with a 5MP rear-camera and a 1.9MP cam up front.


UPDATE: Samsung has now officially announced the ATIV Tab, and in addition to what's been revealed above, we now know that it'll offer 32GB and 64GB on-board storage options. Additionally, there'll be 2GB of RAM and decent 8200mAH battery, while Bluetooth 4.0 and NFC support will also be included, while we now know that its 10.1-inch display will have 1366x768px resolution.