Last month, Samsung rolled out a new ad campaign, targeted directly at iPhone users. The ad called them 'wall huggers' due to the amount of time it showed them just a couple of feet away from a wall, with their iPhones plugged into the socket.

Now, the company is taking that idea to the next level, by targeting people in one of the most obvious places at which people communally use charging points - an airport terminal. As SlashGear reports, at numerous airports across the United States, Samsung has placed ads around charging points in terminal waiting areas, bearing slogans such as:

Samsung Galaxy S5 with Ultra Power Saving Mode. So you have the power to be anywhere but here." 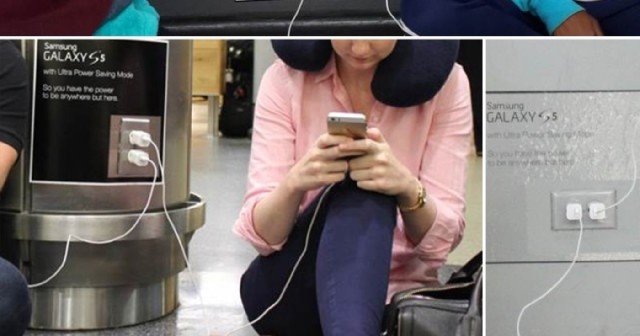 Incidentally, you can find out a bit more about the Galaxy S5's Ultra Power Saving Mode - and everything else about the Samsung flagship - in our review of the device.

While this is an obvious follow-up to the 'wall-huggers' ad which pointedly targeted the iPhone, there are fewer references to Apple in the new batch of ads in airports - although somewhat serendipitously, the photo above does show an iPhone user connected to one of those power points.

Samsung's latest marketing push comes as the company faces increasing pressure around the world from its rivals, seeking to erode its dominant position in the Android space, at all price points. Samsung has been especially troubled in China recently, where Xiaomi took its place as the number one smartphone vendor in China.