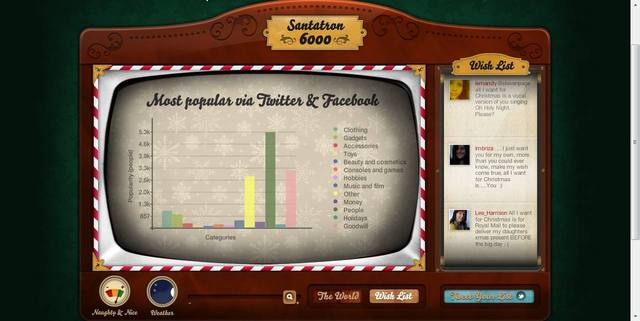 What do we really want for Christmas? One media firm is mining social networks to find out.

Yomego, which is based in Glasgow and London, teamed up with Santa himself to create the Santatron 6000, an online, Flash-based dashboard which takes tweets and Facebook posts to create a global Christmas wishlist. Agency head Steve Richards told the BBC coding the site took about a week and looks for specific keywords related to the festive season. A Yomego spokesperson said staff at the firm had been long-time fans of Father Christmas and were excited to work with him.

''As a major global brand, Santa wanted to find ways to make sense of the conversations that are out there about him, and fortunately, Yomego is perfectly placed to do that. We have been big fans of Santa’s work for as long as we can remember and in many ways, he is a fantasy client,'' the spokesperson said.

The results range from the mundane - ''What I want for Christmas? Laptop, IPAD, Car, All SJ Albums, more friends and an SJ Pulp magazine. Santa, I've been so nice this year ~.~'' - to the downright odd - ''Make my dreams come true. oh baby all i want for Christmas is a pancake.''

Other requests for the jolly man in red include Justin Bieber and one more holiday weekend movie starring Jeff Bridges.

Meantime, Portuguese marketing firm Excentric have put a digital spin on the Nativity, retelling the classic tale via online services including Facebook, Twitter, YouTube, Google, Wikipedia and Foursquare, Amazon. Take a look at the quirky result below.