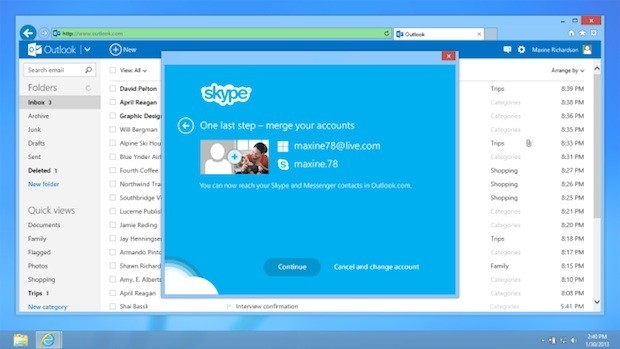 Over the past year, Microsoft has been improving upon its Outlook.com email service. The email service, that launched last July, has quickly been gaining new features such as Google chat integration and the option to archive email.

Today, Microsoft has announced that the Skype integration that was announced a few months back, is now available for those of you who live in the US. We should note that if you live in Brazil, Canada, France, Germany and the UK, you should have access to the service.

Skype is Microsoft’s premier messaging platform and will be replacing the messaging app in Windows 8.1. For Microsoft, they hope to position Skype as the go-to VOIP platform and have been integrating the product into many of its existing products and services. They even recently announced the death of MSN messenger and have been encouraging users to switch over to Skype messaging as an alternative to that platform.

Of course, Microsoft also has Lync, which is a business product that is also a VOIP service. While Microsoft has both brands running a similar service, Skype has the public branding that they hope to use to help attract new customers to services such as Outlook.com by incorporating the popular service into the email client.

For clarification, because we were confused too, the Skype in Outlook.com is still considered in 'Preview', and is not in a RTM state at this time even though the Outlook.com blog post states that it is 'fully available'.