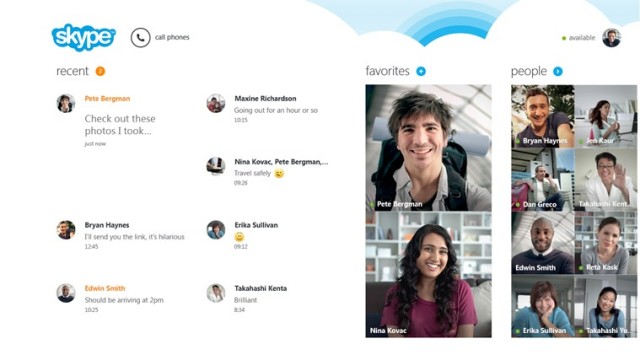 A month ago, Microsoft updated the Skype app for Windows 8 adding the ability for the VoIP app to transfer photos and other files to other Skype owners. Today, the Skype app received another update from the Windows Store, bringing the version number up to 1.6.

While the update is indeed available if you manually check via the Windows Store section of Windows 8, the patch notes on the Skype Windows 8 page have not yet been changed, as of this writing. When we get more information on what the 1.6 version contains, we will update this news post.

The Skype Windows 8 update comes on the tail end of a busy week for Microsoft's in-house team of app developers. Microsoft pushed out updates for their official Windows 8 Mail, Calendar and People apps earlier this week with a number of new features. It also updated the Xbox Games app, along with the free Solitaire, Mahjong and Minesweeper games. The Xbox Video and Xbox Music  Windows 8 apps got new versions as well. Left out in the cold, at least for now, are the Bing developed Maps, News, Finance, Sports and Travel Windows 8 apps.

Update: The Skype Garage blog has posted word that the Windows 8 1.6 update adds some more support to block contacts. It states:

To block a contact, select the person’s name to open up the chat window. Bring up the command bar by swiping at the top or bottom of your screen (or right click), and select block. You may also choose whether you want to remove or report the contact request as spam.

The update should also load contacts faster than before and fixes some bugs.