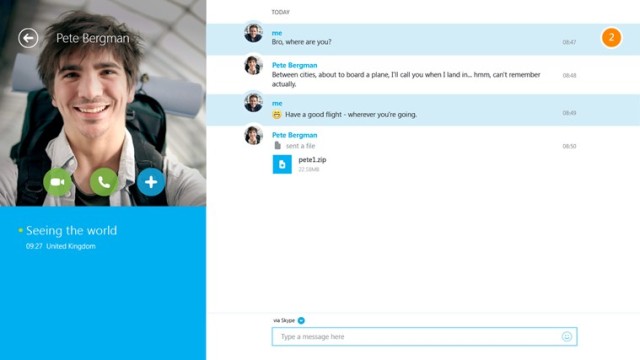 The Skype app for Windows 8 has received its share of criticism from users who have felt that the app has lacked many of the features that other ports of the VoIP software have had access to for years. This week, the Skype app got a new update via the Windows Store that finally adds a long requested feature.

That feature is the ability for its users to transfer photos and other files to other Skype owners. That means people who are engaging in text, voice or video chats can finally share photos, documents and other files without having to go to another app. It should be a big help for Windows 8 owners who regularly use the Skype app for long distance collaboration and projects, or if they just want to show off the latest cute cat/memes with friends.

The change notes for the Skype app also indicate that there have been some unnamed performance improvements as well as some bug fixes in this new version. Let's hope we continue to get some new features in future updates, particularly the new video messaging feature that recently entered into a beta for other Skype ports. The Windows versions will reportedly get the video messaging feature in late April.