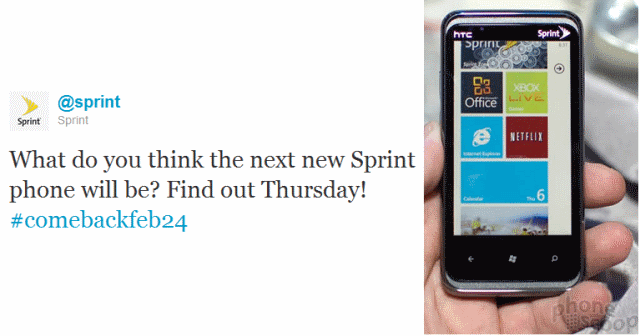 Sprint have been posting tweets hinting at a Thursday launch of the HTC 7 Pro, and in another Tweet submitted yesterday, read:

"If you could design a brand new phone, what would it have? Ours will have a hub for gaming, music, pictures and video."

That indicates only one OS in the world and it isn't Android!

We'll be looking out for info regarding availability, pricing, etc in the next 48 hrs. But for now, it seems that Rafael Rivera of CheveronWP7 fame was right on the money when he tweeted that Sprint customers will be enjoying Windows Phone 7 in the first two weeks of March, also saying that the phone would in fact be the HTC 7 Pro.

WPCentral had earlier speculated that this was the case and later confirmed it.

The evidence they put together yesterday can be seen below: