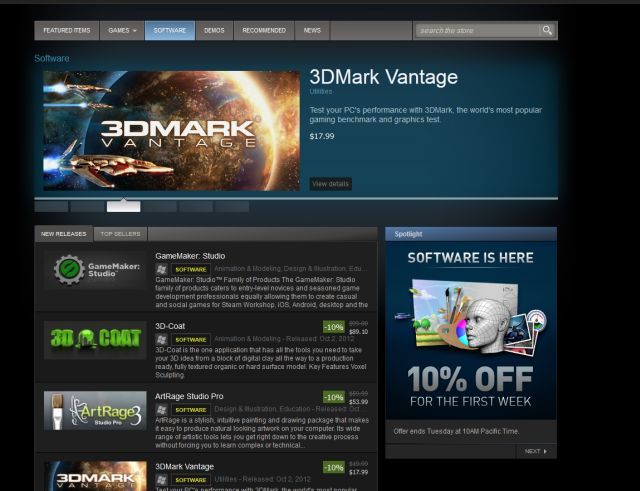 In August, Valve announced it would begin offering non-game based PC software products for sale on its Steam service. The software store was supposed to launch in early September, but that date came and went with no such launch. Today, the software storefront for Steam finally went live.

The software store launch is extremely modest at this point. There are just seven products available to download and that includes Valve's own free Source Filmmaker software that lets users make in-game movies based on Source Engine games such as Team Fortress 2.

The other software products include two PC benchmarking programs from Futuremark; 3DMark 11 and 3DMark Vantage. The other products are GameMaker: Studio, CameraBag 2, ArtRage Studio Pro, and 3D-Coat. All of the non-gaming software titles on Steam will be priced at 10 percent off for this launch week.

Many of the launch titles will take advantage of popular Steamworks features, such as easy installation, automatic updating, and the ability to save your work to your personal Steam Cloud space so your files may travel with you. GameMaker Studio, for example, features integration with Steam Workshop that allows GameMaker users to share their work via Steam.

Many people believe Valve is entering the non-gaming software distribution business as an answer to Microsoft's Windows 8 and its own downloadable Windows Store feature. Valve co-founder Gabe Newell has been highly critical of Windows 8, saying that in his opinion that its launch will be "a catastrophe for everyone in the PC space."