One of our Neowin members was lucky enough to be chosen for the Steam Machine beta test, and we are also lucky in that we have been given permission to post the review in full from his personal website, which you can check out here.

Without further ado, here in full BoneyardBrew's impression of the Steam Machine.

Over 400,000 Steam users were eligible for selection in the Steam Machine beta test. Only 300 were chosen. I never would’ve guessed I’d be one of them as the odds were certainly not in my favor. Being one of the lucky few makes it my self-proclaimed duty to share my impressions not only with Valve, but the public as well. Let’s get started, shall we? 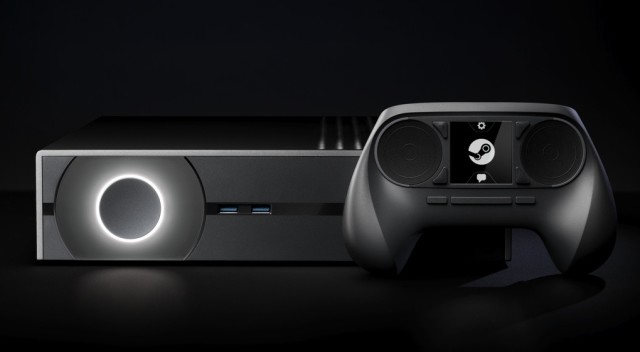 Who could’ve asked for better delivery? Each prototype Steam Machine arrived in a specially made wooden crate adorned with various Valve and Steam-related logos and markings. The top tells you exactly what to expect when you open it if you weren’t already familiar: a Steam Machine and Steam Controller. Scan the rest of the crate and you’ll spot a cute companion cube suggesting you handle this delicate package with care. I’d listen if I were you…

Rather than force you to crack this crate open with a crowbar, Valve decided on a more friendly approach. Simply snip the restraints and twist and lift the latch. Inside you’ll find your Steam Machine snuggly encapsulated by styrofoam. Carefully remove it and you’ll find the controller, manuals, and cables just the same.

As a graphic designer I can't neglect to comment on how beautiful this guide is. Don’t believe me? Take a look for yourself. I even designed the site around it. 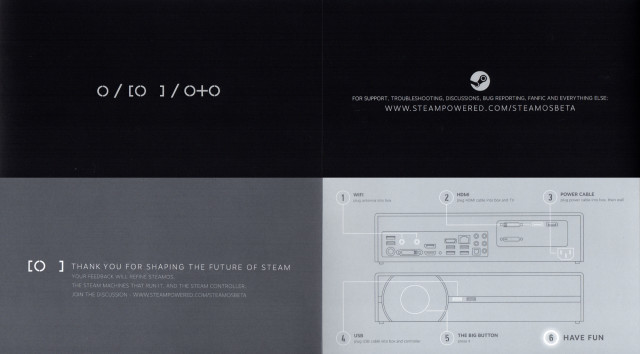 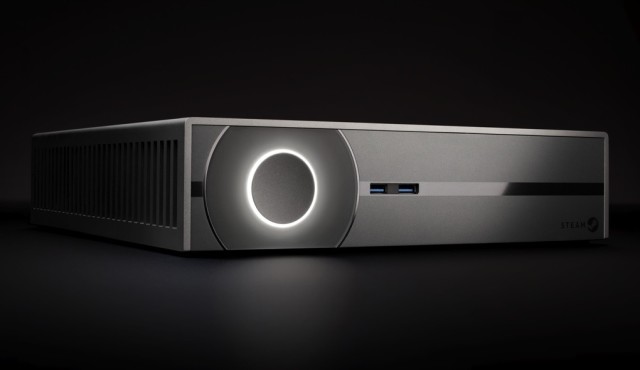 Surprisingly premium. I can’t help but compare the build quality to that of an Apple product. Looking at it isn’t enough, you just have to touch it. Running your hand across the smooth metal while admiring its visual beauty is a delight to the senses. Power up the machine and the button emits a soft, white glow. Stunning!

This particular machine is oozing with power. The motherboard has plenty of ports and is also Bluetooth and wi-fi capable, which is a nice treat.

Steam OS promises to provide a comfortable living room experience in addition to also overcoming graphical and performance-related hurdles associated with other operating systems. To put it in fewer words, Steam OS is meant to be a lean gaming and media consumption OS. Sounds good, right? I think so, at least.

If you’re familiar with Steam’s Big Picture mode you’ll feel right at home with Steam OS. As of today the two are very much the same. As in currently stands, Steam OS only accepts HDMI as an audio output so I was unable to test any games on the platform. This is already on their to-do list so I expect they’ll fix it in a timely manner. 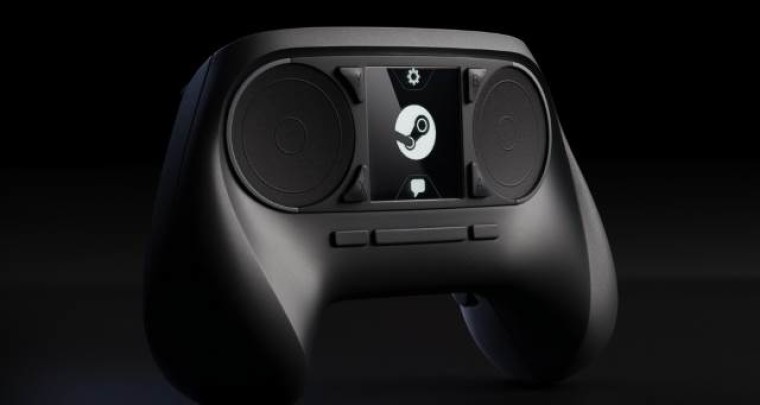 Having been a PC gamer for the majority of my life I can say with confidence that controllers aren’t my area of expertise. Do I prefer them for fighters and driving? Absolutely. Although it’s of my opinion that there are not many fighters or driving games worth playing on PC these days, but that’s a topic for another time.

As a Playstation owner last generation I still found myself leaning towards Microsoft’s offering as my controller of choice. It fits my hands well and appears to be made of higher-quality materials than the competition. The Steam Controller seems to take more cues from the Xbox controller than it does the Playstation ergonomically, but is its own beast entirely. First and foremost, it’s quite larger than both. I don’t have big hands by any stretch of the imagination, yet it still manages to feel comfortable to me. All pads and buttons are easily accessible and exactly where my thumbs naturally lay, which is a must for a device that you could have in your hands for up to several hours per session.

Valve has attempted to make a splash in the market by merging a traditional controller with the precision of a mouse, all while sprinkling in a few extras for good measure. You’ll find no analog sticks on this product, and quite frankly I won’t miss them. By default, the left input pad replicates your standard directional pad. You can choose to glide your thumb across it or press it to solicit a response specific to the game you’re playing. The right input pad is mapped 1:1 with your thumb movement and is similar to the functionality of a mouse. In my short time with it I can say that it seems to be both accurate and functional. Rather than finding four buttons on the right-hand side, you’ll see they’ve been split down the middle with Y and X appearing near the left input pad, and B and A near the right. The prototype controller has a centered grid of four buttons in lieu of the touch screen that will be seen on the retail model. Three buttons, two of similar width, are found directly south of the aforementioned grid. This controller has triggers and bumpers that match that of most controllers, as well as two longer triggers on the back.

I found myself having quickly adapted to the controller’s unique play-style and capable of completing chambers with ease in a relatively short period of time. Perhaps coming from a mouse eased the transition as I was able to dive into it without any attachment to traditional analog sticks. I completed the campaign in its entirety with the controller and didn’t fall back to my preferred method of input even once. If I were to criticize one thing it would be the somewhat odd bindings, although that’s not a flaw of the controller, is it?

Steam Machines can be seen as a peace offering to the divided PC and console gaming communities. Valve’s efforts have resulted in a product that combines the ease-of-use you expect from consoles, with the power and flexibility of a custom-built system. That’s the best of both worlds, I’d say. Avid PC gamers may give this a pass, but if you’re new to the scene a Steam Machine is surely something to consider.

To view the unboxing photos and a gameplay video, go here.

We would like to thank BoneyardBrew for permission to post the review here at Neowin in full if you have any questions, head to the forum thread.