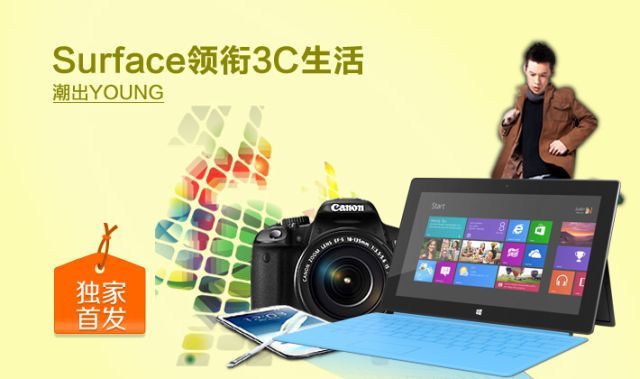 Microsoft has previously stated that it planned to sell the Windows RT-based Surface tablet by itself, at least for now, in the US, Canada and other countries. However, there is now one exception. As previously rumored, Microsoft is now allowing the retailer Suning to also sell Surface in its native China.

The official Suning.com website has the Surface right on its front page, and the pre-order page is also live. The retailer is selling the product in its 32 GB version without the Touch Cover for RMB 3688 ($589). The 32 GB version with the Touch Cover is selling for RMB 4488 ($717) and the 64 GB versions with the cover has a price of RMB 5288 ($845). The prices are the same as Microsoft's on its own Chinese Microsoft Store website.

Suning also operates over 1,300 retail stores in China. It is currently unclear if the retailer will also sell Surface tablets in its brick and mortar locations. We have emailed Microsoft for comment.

Online sales for the Surface tablet have been brisk so far, with the tablet going on back order quickly in the US.

Thanks to laurent for the tip!