In January, we posted an interview with David Haddad, the developer of LCARS Interface, a $2.99 app for Windows 8 that has a number of features that are under a UI skin made to look like the CARS (Library Computer Access/Retrieval System) UI seen in a number of Star Trek movies and TV shows. 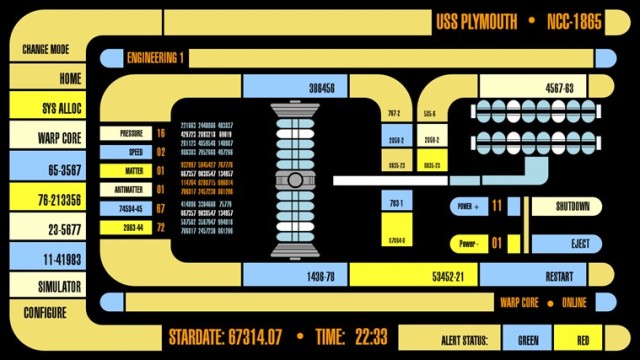 Now it looks like a lot of other Windows 8 users have caught onto Haddad's app. LCARS Interface is, as of the writing of this post, the number one paid app in the Windows Store. Yes, that means this app is current ahead of well known apps such as Angry Birds Star Wars, Doodle God and Plex.

We got back in touch with Haddad to find out why and how the app has suddenly charged up to the top of the Windows 8 paid app list. He responded back with this answer:

I think a large part of the reason why LCARS Interface is currently the #1 paid app in the store (which is not as profitable as you might think) is due to how happy people seem to be with it. A lot of work certainly went into the development and it continues to be that way. Since the initial release almost 6 months ago, there have been 22 updates with almost all of them adding at least some new functionality to it. The app was featured in the large spot of the Entertainment category on the front page of the Windows 8 Store and that certainly helped get attention even from those who are not sci-fi fans but still thought it would be cool to play with an app like that.

There has also been a flurry of 5 star reviews from all over the world and have an overall rating of 4.7! Nothing makes a developer happier than people liking their work. Motivation to continue working on it comes from those who enjoy using it and send e-mails or leave comments saying so. There have also been some great suggestions from users which have made the app better for everyone.

We also asked him what has been added to LCARS Interface since we last spoke with him in January. Haddad told us:

There have been lots of things added since your initial article. Every component that was in the app at that time has been improved. More features have been added to the media player, the log editor has grown to support audio and video logs in addition to just text, and the calculator now has full scientific capabilities. Those are just additions to the modules that existed at initial release. Several more components such as international weather information, a file manager, and a clock that has stopwatch and countdown functions have all been added since. I've had a lot of people e-mail me and say they love leaving the clock module up at work on a second screen or take notes with the text editor. Apparently it gets them a lot of attention from co-workers!
It is great to see people use this app for actual work because for a couple decades now people have been trying to make LCARS work as a real interface. Hopefully this app has taken a step in the right direction for it, although there are some other great LCARS programs out there too. There have been lots of people who love it so much that they are asking for deeper integration with Windows and some other functions that just aren't possible within the restrictions of Windows Store apps. This may lead to a more integrated Windows desktop application at some point though if those restrictions really start getting in the way of how good this app could be.
There has also been a new side of the app added that caters towards those who would rather play with computers on a starship than work. Several modules have been added that would simulate what a ship computer from the 24th century might look and act like. Obviously these designs are based upon things from Star Trek, but they also are interactive and aren't just a bunch of buttons with numbers on them that don't do anything. I think this adds a lot to the fun of it to be able to press buttons and see things actually happen as you would expect, and being non-canon to the shows isn't necessarily a bad thing.
Perhaps some day these modules will all interact with each other for a full ship simulator! The app also includes a simulator game based upon a classic text based game that has been re-made with a graphical interface and the response to that has been great. The simulator is also available as a standalone game for Windows Phone 7 and 8.

Finally, we asked him about future plans for LCARS Interface and his own plans for making Windows 8 apps in general. He told us that more modules are in the works and he hopes to keep updating the app "as long as there is interest in the project." Haddad also told us he plans to release a version of LCARS Interface for both Windows Phone 7 and 8 that will have more than just the game. The fact that a Windows 8 app that's several months old like this one can suddenly be discovered shows that if you have an app that's well made, it will find its audience in time.