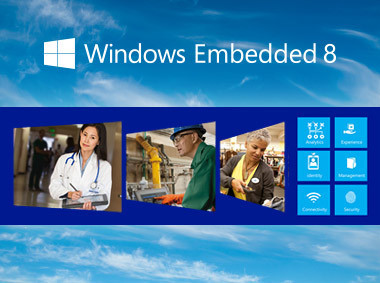 Along with the public preview version of Windows 8.1, Microsoft decided to offer up a preview version of another of its operating system this week. It's the beta build of Windows Embedded 8.1 Industry, and its early release will allow developers, OEMs and enterprise customers to start testing current and upcoming embedded device products ahead of the final OS release later this year.

Microsoft launched the final version of Windows Embedded 8 Industry less than three months ago. In a press release this week, Microsoft said Windows Embedded 8.1 will have a number of improvements and additions, including a way to "extend flexibility and lockdown capabilities enabled by the Unified Write Filter, Keyboard Filter, USB Filter and Gesture Filter to ensure a consistent device configuration."

Windows Embedded 8.1 will also have more support for the use of Windows 8 apps, along with adding hardware support for products like magnetic stripe readers and bar code scanners. Microsoft is also planning to release Windows Embedded 8.1 Pro later this year, which will have "a full, license-restricted version of Windows 8.1 Pro with x86 and x64 support." Windows Server 2012 R2 for Embedded Systems is also scheduled for release later this year.