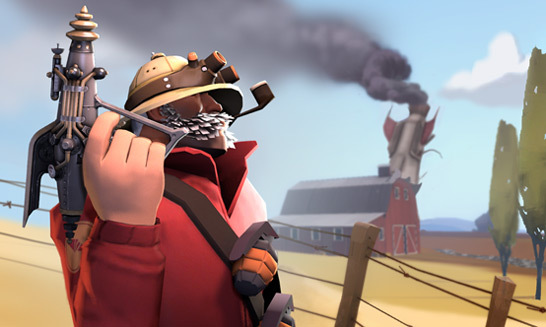 Valve's free-to-play multiplayer shooter Team Fortress 2 is now gaining revenues solely by selling new weapons and cosmetic in-game items via its Mann Co Store. This week the game's official web site announced that it will be offering new in-game items that have been designed by the famed WETA Workshop. The New Zealand based company is known for its make up, creature and visual effects work on a huge number of movies and TV shows, including the Lord of the Rings trilogy, Avatar and others.

The WETA Workshop's new in-game items for Team Fortress 2 are part of the company's series of "Dr. Grordbort's Infallible Aether Oscillators". These collectible retro space pistols and guns have been sold by the WETA Workshop for the past few years. This week Team Fortress 2 players can now purchase Dr. Grordbort's Victory Pack, which gives players two new weapons based on the WETA Workshop designs (the Cow Mangler 5000 and the Righteous Bison). In addition the pack adds two new in-game hats (the Pith Helmet and Googles and the Novelty Pipe with Mutton Chops).

In addition to the new in-game items, the Team Fortress 2 web site has launched a new three page online comic book that tells the fictional story of how the new guns entered into the Team Fortress 2 universe. If you happen to be attending the San Diego Comic-Con this weekend you can head over to the WETA Workshop booth and get a promo code that will give Team Fortress 2 players a discount on the new Dr. Grordbort's Victory Pack.