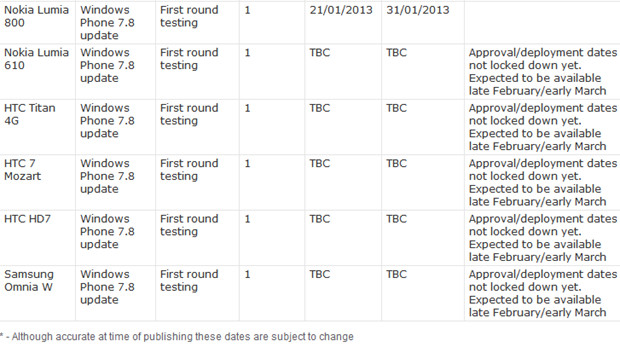 Yesterday we were talking about the updates that Nokia pushed to some of their apps which now require users to update to Windows Phone 7.8. At the time this seemed to reveal that the long awaited update for older Windows Phone devices might be released really soon. O2 then went on record and officially stated that Windows Phone 7.8 would be released by the end of the month giving some solid evidence for the previous rumor.

Another carrier, Telstra, has now jumped on board and they have posted more detailed information on the upcoming Windows Phone 7.8. As you can see in the image above all devices are supposed to get the update but some will get it sooner rather than later. Nokia's Lumia 800 is the first device to get the update, the other ones being scheduled for later releases in February and March, with exact dates to be decided later.

This goes along with what we said earlier, that the update may be delayed on certain carriers. And to be fair O2's official statement yesterday was in regards to the Lumia 800 specifically.

We're happy these updates are coming though we can't help feel that they're too little too late at this point. Let us know how you folks feel below.