I'm a big fan of mechanical keyboards, and still use the 1984 IBM Model M as my daily driver. The tactile response when pressing the keys helps aid in day-to-day typing, and the durability is unmatched.

Late last year, I reviewed the Tesoro Excalibur, a mechanical keyboard with a single backlight. The keyboard received high praise, but the software didn't allow users to light up individual keys and, of course, it had the same colored LED lighting up every key. At the time, Tesoro promised they would be releasing a full RGB keyboard in the near future. That time is now, and the product is called the Excalibur Spectrum.

Physically, the keyboard is extremely similar to the original Excalibur, so much so that I highly recommend you read the original review. Go ahead, I'll wait. 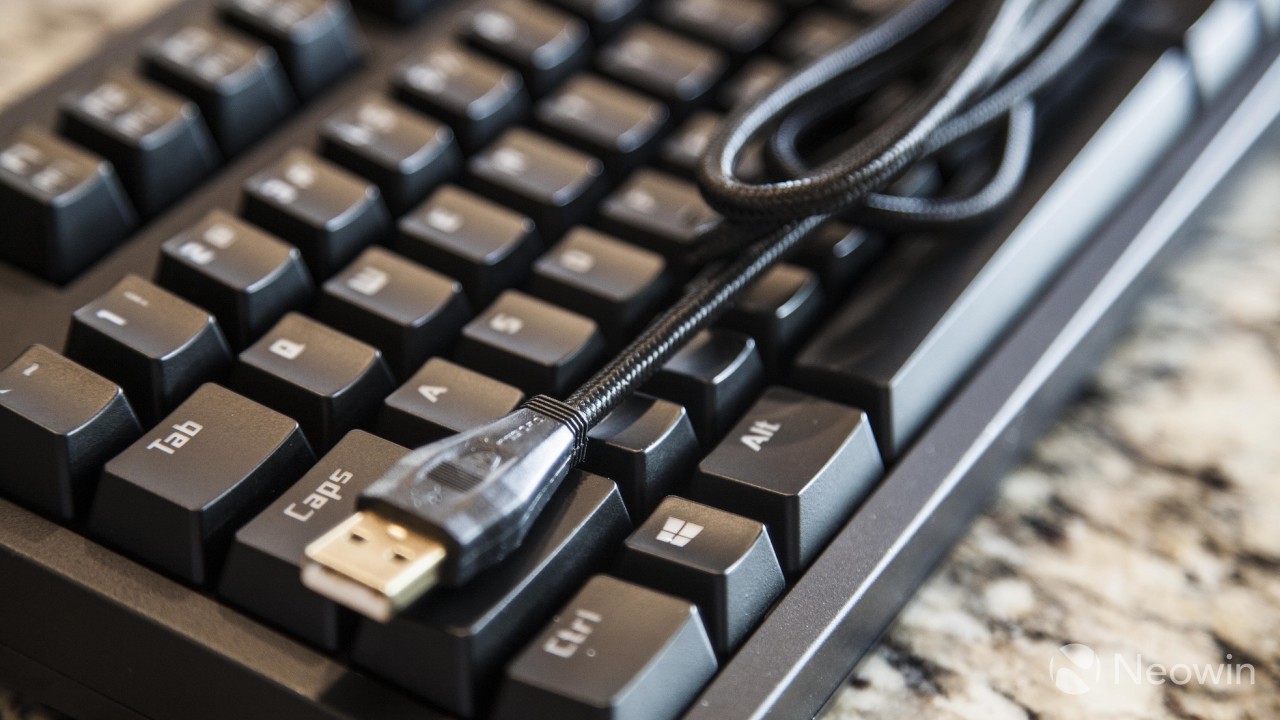 From a purely physical perspective, there aren't very many differences between the original Excalibur and the Excalibur Spectrum. The keyboard is just as solid as the original, has the same rubber mats on the feet to prevent slipping, and the same strong keys. There's a few minor improvements, such as wrapping the USB cable in a mesh and using a gold USB connector. Then there's a few cosmetic changes, such as moving the controls to modify the brightness and mode from the keypad to the arrow keys, and the company name on the space bar has been replaced with a long line. Other than that, you'd be hard pressed to tell the difference between the Excalibur and the Excalibur Spectrum if someone handed them both to you.

Under the hood, there's a couple of differences between the two keyboards. While the original Excalibur I reviewed had Kailh brown switches, the Excalibur Spectrum has Kailh red switches, although brown and blue are both available as well. If you're not familiar with the differences between the three types of switches, Tesoro explains it on their website. Then, of course, there's the difference in LEDs. The original Excalibur has a single color, while the Spectrum gives you a wide range of colors to choose from. 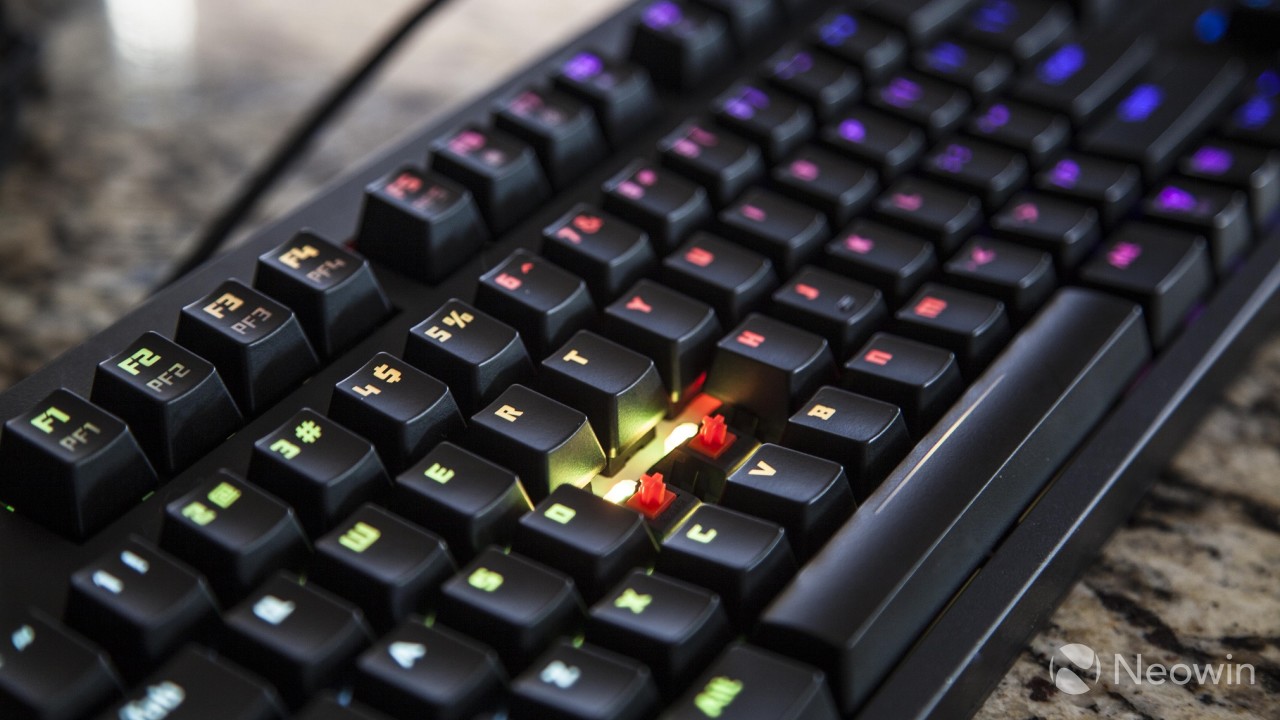 To be honest, I didn't notice much of a difference between the brown and the red switches on the Tesoro keyboards. It may partially be because I'm used to the clickity-clack of the IBM M-series keyboard, so anything less isn't tactile enough for me, but during normal day-to-day typing, I wouldn't be able to tell the difference. I'd like to try out blue switches at some point to see how they compare, but if you don't want an audible click, you can't go wrong with either brown or red.

Let's face it though: The only reason you'd buy this keyboard over the regular Tesoro Excalibur is if you wanted your keys to be different colors, and on that front, the Excalibur Spectrum delivers. You can control the function and the color brightness by simply pressing the function key and the up/down arrows or the left/right arrows. 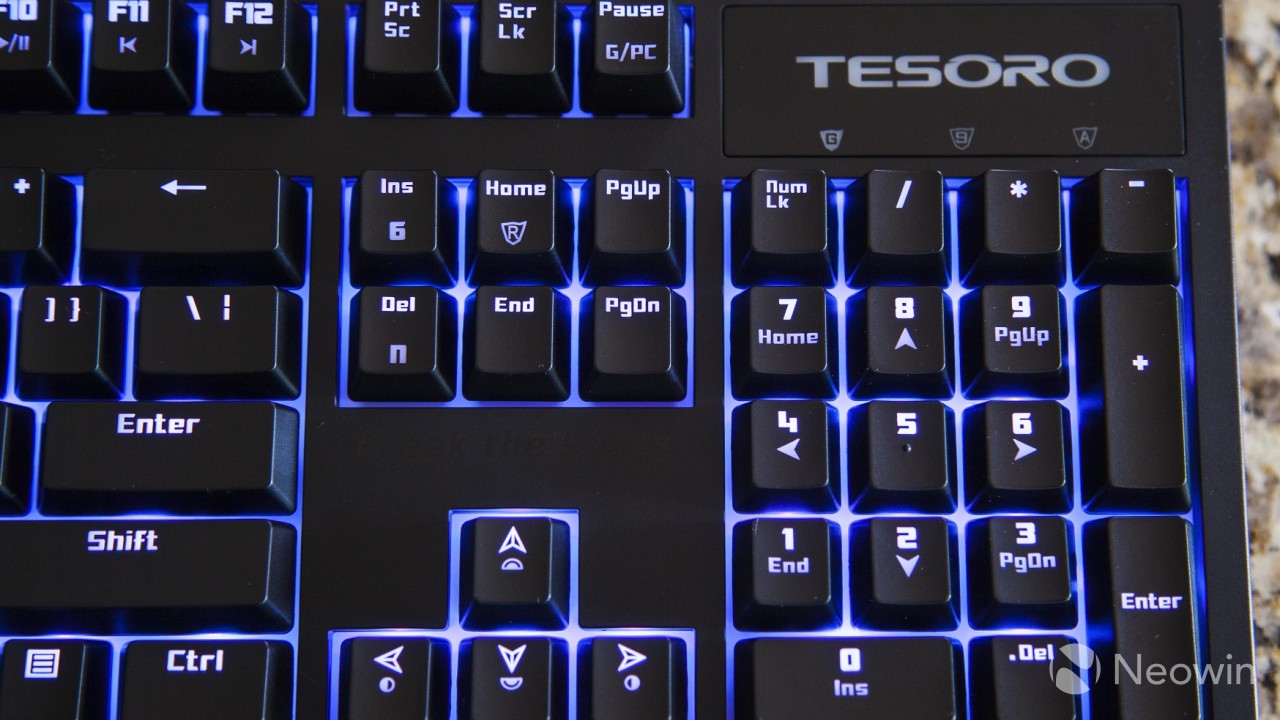 There are several different levels of brightness available, from none to very bright, and unlike the original, the Spectrum offers seven different functions that allow the keys to light up in different ways when you press them: Trigger, Ripple, Firework, Radiation, Breathing, Rainbow Wave, and Spectrum Colors.

Trigger mode lights up the individual key as you press it, before fading back off. Ripple makes the entire keyboard light up every time you press a key. Firework is interesting in that it lights up the key you pressed, as well as all of the keys around it but they are a slightly different color than the main key in order to imitate a firework. Radiation, my favorite, streaks light horizontally out from the key you pressed. Breathing fades all of the lights on and off. Rainbow Wave is more of a demo mode that shows off all of the colors on the keyboard, and Spectrum Colors is used in combination with the software to light up individual keys in different colors.

The Excalibur Spectrum has the same two rollover modes (6-way and n-way) which work exactly as with the previous version.

One of the main complaints about the Excalibur was that the software wasn't very user-friendly. I had high hopes that Tesoro had fixed this drawback, but alas, the software is just as difficult to use as before. 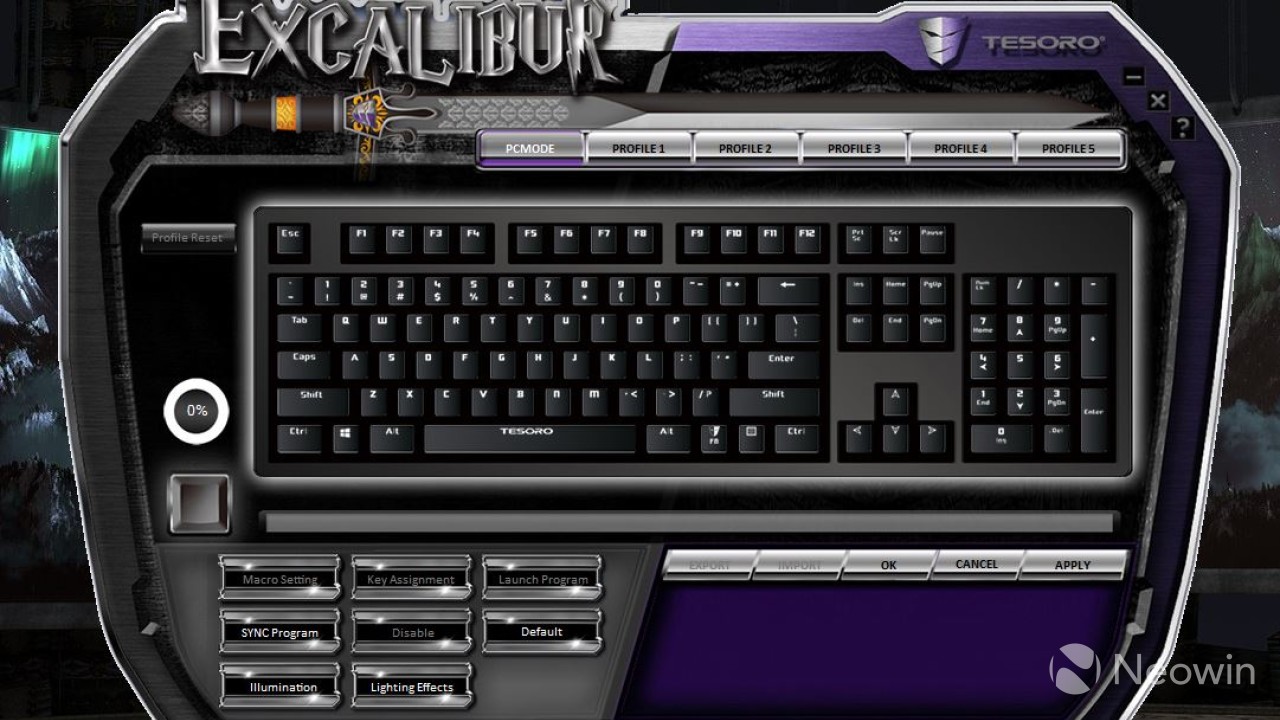 Instead of being presented with a standard rectangular window, you instead get an awkward trapezoid-like display. Curiously, the software has no Spectrum branding, and the picture of the keyboard is of the original Excalibur.

Most of the functions, such as Macros and Key Assignments, are handled the same way as the previous keyboard so I won't go into detail. The new configurations are managed by the Illumination and the Lighting Effects menus. 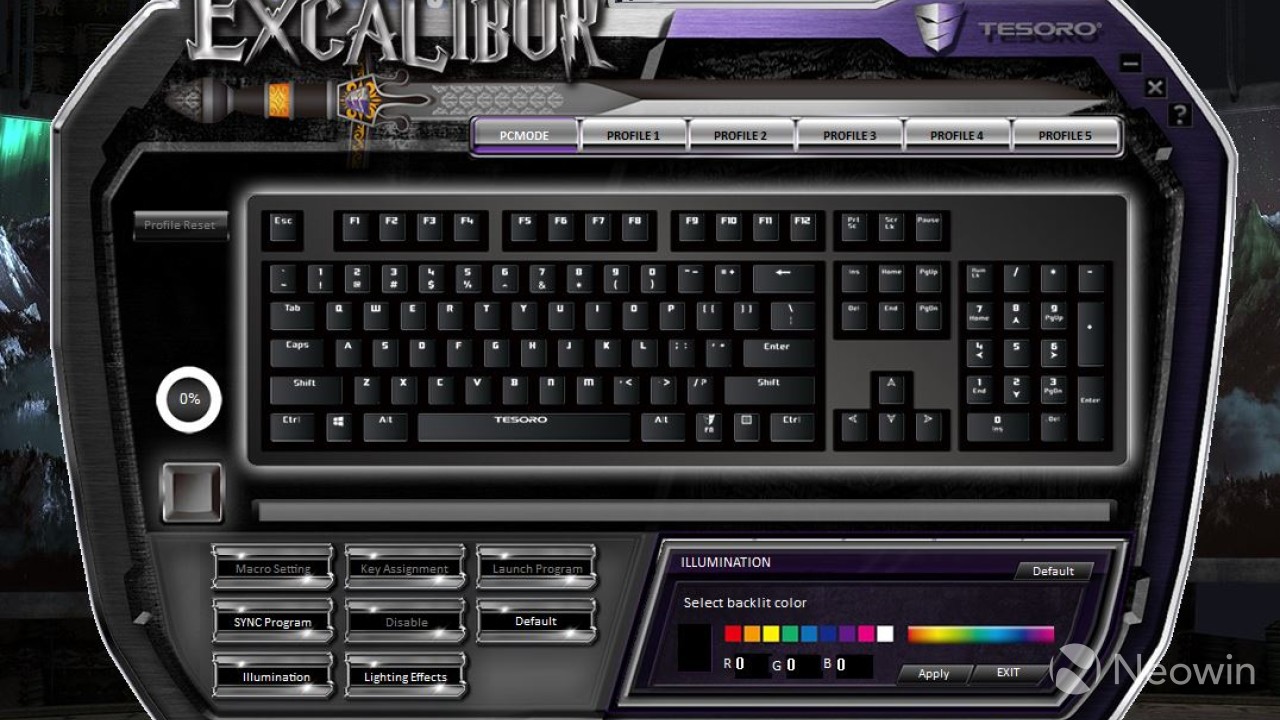 Illumination is simply where you set the default backlight color. Click on the color you want, click apply, and the keyboard will start displaying that as the primary color. Each time you press a key in any of the non-Spectrum Color modes, the keys will light up with that color, and the setting is stored in the keyboard itself so you won't need the software anymore. 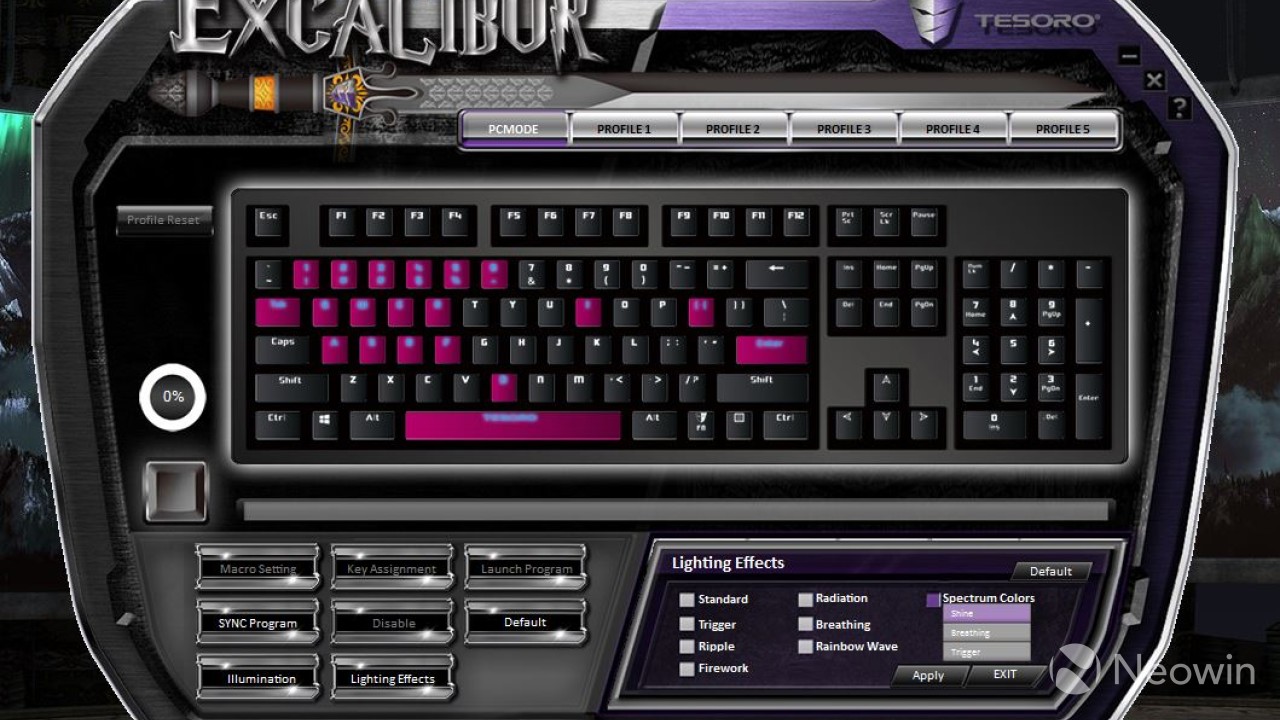 Instructions for setting up individual colors for each key was not actually in the manual, and the software was not very intuitive, but after some trial and error I was able to figure it out. To start off, click on Lighting Effects button, then click the Spectrum Color mode. From here you can click an individual key on the on-screen keyboard, select what color you want it to be, and click apply. Wash, rinse, repeat, then finish off by selecting which Spectrum mode you want (always on, breathing, or trigger). Sadly, there's no way to know what color each key is set to unless you click on it. It seems like Tesoro could at least use the color of the key in the interface, but unfortunately everything is a reddish-purple.

Tesoro took everything that was good from the Excalibur, added individually controlled RGB LED lights to every key, put in a few different lighting functions, and only increased the price of the keyboard by $20, which seems pretty impressive to me. 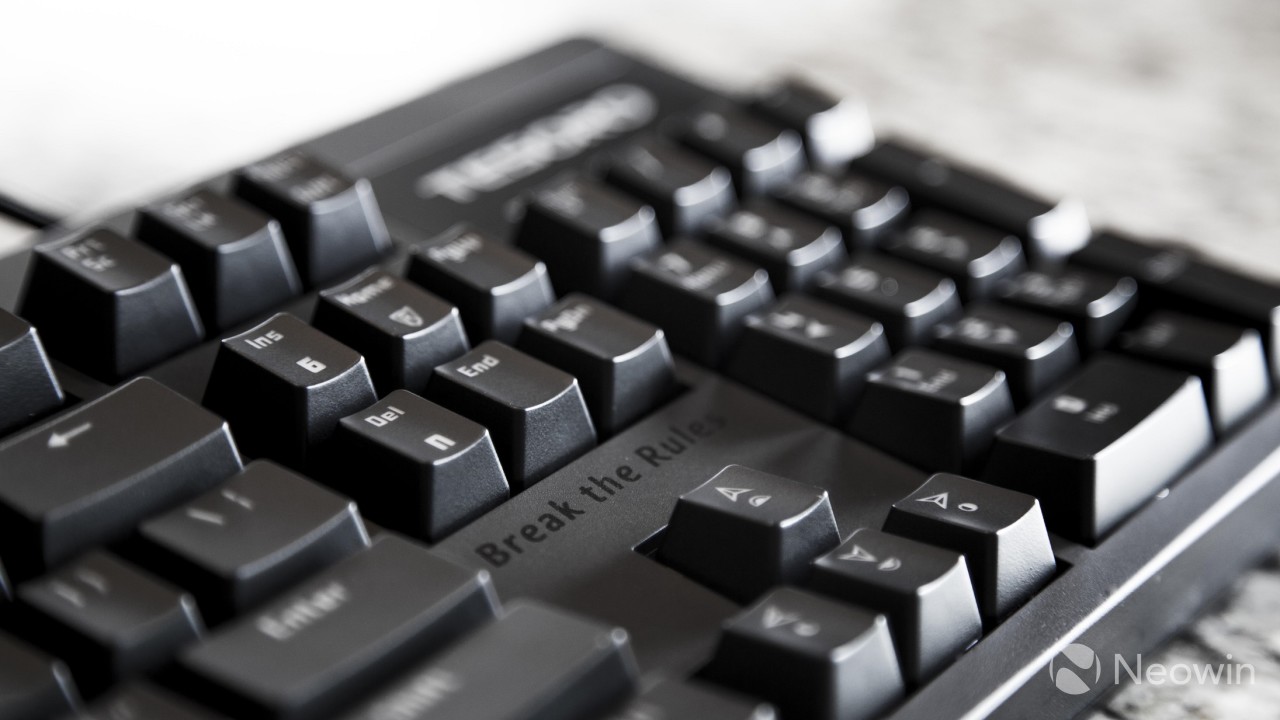 There's really nothing to complain about when it comes to the physical keyboard itself. It feels like a solid build, it looks good in both a gaming or office environment, and the different color modes add a "cool" factor, my favorite being the Radiation mode. Being able to change modes directly from the keyboard without having to fire up the software is also a nice touch.

Unfortunately the company still hasn't hired better software engineers. Although the software configuration tool works, it's clunky and difficult to figure out. The main draw to the keyboard, individually assigning colors to keys, took a lot of trial and error to figure out and the documentation is non-existent. That said, once you figure it out, it's not difficult to work around the problems. 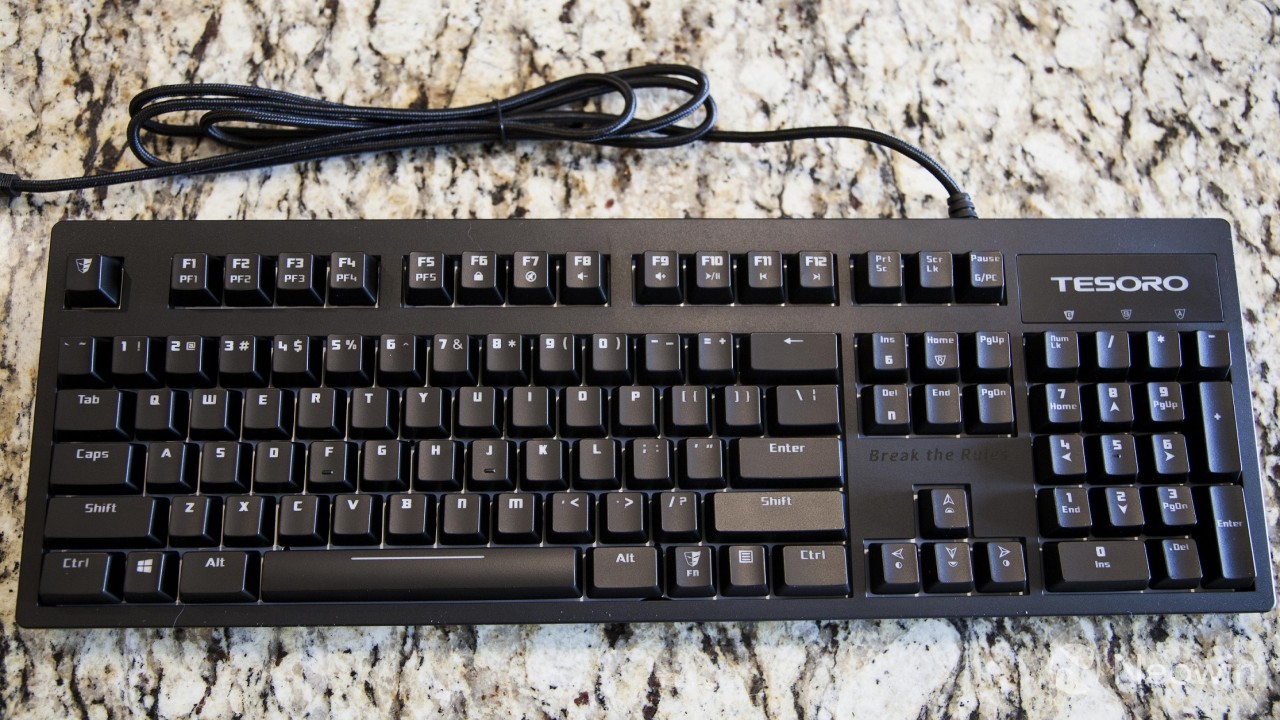 If you're looking for a great feeling mechanical keyboard and like the idea of the cool lighting effects, you can't go wrong with the Tesoro Excalibur Spectrum. If you like everything about the keyboard but don't care about the pretty colors, save yourself $20 and pick up the mono-color Excalibur. I don't know what rules you'll be breaking, as the keyboard suggests, but in either case, you won't be disappointed with the performance.