For quite a few years it was a costly process to find a lost family member, involving investigators and a lot of searching through paperwork, recently, there have been multiple stories of people finding lost children, siblings and parents on Social Networking sites such as Facebook and Twitter. With over 14000 babies put up for adoption in the United States during 2002 it is not hard to see why so many people might turn to alternative, cheaper, methods for finding their relatives. 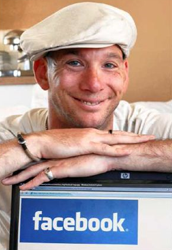 One such example case is that of a British boy who was given up for adoption shortly after he was born, the article claims that his birth parents felt he would lead a better life being raised by someone else.

Thirty three years later and Richard Marks managed to track down his birth mother and siblings using Facebook and even arranged to meet with them, "I called my mum - I could hear a faint blubbering so I said 'hello mum' and that was it we were talking and crying for the next two and a half hours about our lives, I feel like my life has started again and I have a whole new family", "Facebook has changed my life - if it wasn't for that then all this wouldn't have happened."

Plenty of articles and guides have been written to help people find their loved ones and with more and more newspapers picking up on these types of stories, its seems its a trend which is likely to continue. Even Twitter, which some may think as of a less reliable method, was used by American Adam Smith to find his long lost brother. After doing a little searching he found another user and, with a few tips from his parents, found half brother Matthew who told Adam "things from my childhood that I had heard bits and pieces of growing up -- things nobody could have possibly known."

I have witnessed the power of social networks myself, about a year ago I knew I had two half sisters, it was just fact. I remember during French lessons, when asked about family, I would say 'J'ai deux demi-sœurs et pas de frères', however this all changed about 11 months ago when searching on Facebook for information about my family name and its origins.

As you can see my surname is not a common one, I was the only Hausjell on any social website in 2007 but noticed more and more joining Facebook in 2008 onwards. I decided to message some of the others and enquired about whether they knew anything about the family name, I was hoping for a little bit of information, but I was unsuccessful for over a year. One day, to my surprise, one of the users replied with a few questions for me, they asked my fathers name and where he was born, I found this quite intriguing so replied and got a response which, to this day, has still not quite set in.

After 22 years this is not the sort of news people would expect, in fact I just sat there, staring for two to three hours not quite sure how to reply. We verified a few details, after all this is the Internet, and finally met up during the summer of 2010. As I am sure fellow family-finders found, it is an emotional and strangely awkward event to attend, however the end results are worth it.

I was born and raised in England and would have never thought about looking further afield, or even where to begin, to find family. The cost was zero and, with some patience and a small amount of effort , I managed to completely change my life showing that social networks really do have the potential to change peoples lives in a drastic way.

Of course there are other, more well known and dedicated methods to find lost family. Earlier on I was speaking with Neowin reporter, Byron Hinson, who told a story about finding lost family using Ancestry.co.uk. A few years a go his parents were building a family tree using the website when they discovered a few lost cousins on his mothers side. His parents traveled to Cornwall and they all met up in a pub, they even met the cousins children. Byron said it "was a happy event" and that the result is "proof that hard work on the net pays off."