If you frequently download stuff via BitTorrent, you probably already know that it’s not exactly a model of privacy and anonymity. But if you were in any doubt about that fact, a new website may well hammer the message home.

YouHaveDownloaded is a Russian site that tracks users across the web, monitoring BitTorrent traffic to and from individual IP addresses. But if that’s not enough to give you the heebie-jeebies, get this - they’re also identifying and collecting data on all of the files that you’ve been downloading, and exposing the information publicly on their website. 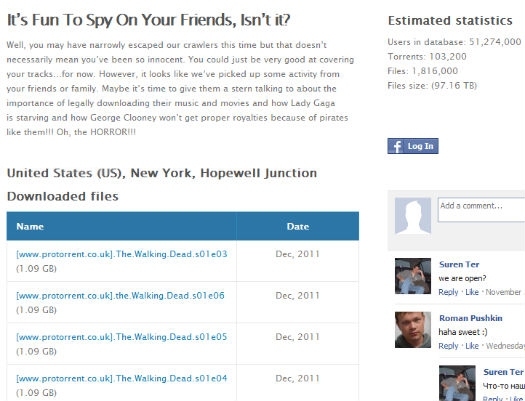 The site’s owners claim to already be tracking around 20 percent of all public BitTorrent traffic, and their database has swollen to include well over 51 million users, 100,000 torrents, and almost 2 million files totalling more than 97TB of data.

The database is growing, and it’s searchable too. When people visit their site, they’re immediately greeted with their download history, if the site has been able to harvest data from their IP address, but users can also search for files and other IP addresses to see who’s been downloading what.

The site’s developers say that they created it in part as a wake-up call. TorrentFreak spoke with Suren Ter, a co-founder of the site, who explained: “We just want to remind people that the internet is not a place to expect privacy. Nowadays, many people use it without understanding what information they leave behind. Even those who understand choose to ignore it quite often.”

Of course, if you use a proxy or a VPN, or you’re taking similar privacy-enhancing precautions, you should find that your torrent history is relatively shielded from prying eyes. (And if you use a dynamic IP, you may well end up seeing a list of stuff that someone else has downloaded.) But if you do find that your history is splayed across a web page for all to see, then take this as the slap in the face that you need to do more to protect yourself while engaging in BitTorrent action.

The team behind the site are keen to emphasise that their aims are not nefarious, and that they’re only aggregating information that’s already publicly available. But they do give users the option to remove their IP addresses from the database, stating that “we don’t have to accommodate requests for removal, but we are nice people”.

The developers also plan to develop a more secure and private file-sharing protocol. Suren Ter explains: "The general idea is similar to what Bitcoin does. The key is to have an anonymous and reliable identity for each peer, and a Bitcoin-like signature chain algorithm will help." Although they believe their idea is sound in theory, they're some way off being able to implement it in practice. Until then, make sure your system is properly shielded from prying eyes.

Be sure to head on over to YouHaveDownloaded.com to see how many of those nasty, freaky vids that you torrented over the weekend have made it into their database.