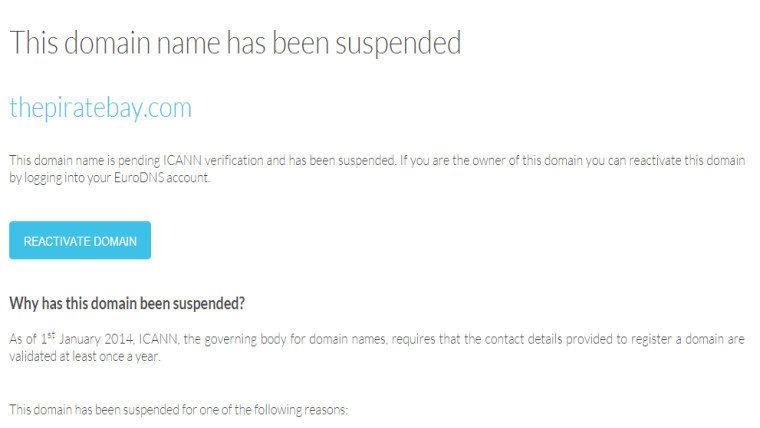 The Pirate Bay has been the Warez scene's most controversial venue since the days of Napster. From being taken down over and over and over again - sometimes by government agencies and sometimes by blackhats, through to the various court cases, raids, and government-mandated ISP blocks - it somehow always manages to rise again and come back in full force.

In the latest round of The Pirate Bay fiasco, however, the domain name registrar for the ThePirateBay.com domain has 'suspended' the domain. The actual reason provided by the registrar claims that it has something to do with the owner's contact details, and goes on to suggest that it may have happened because it's a new domain that hasn't had its details verified yet. Other possible reasons also state that the domain has been modified or transferred and has not been validated yet, or the annual validation email has not been actioned.

With that being said, it's also extremely likely that it's none of the above, and there could be bigger elements in play that have prevented the domain from either being renewed, or have suspended it for some sort of legal reason.

Nevertheless, this is just the .com domain that has been taken down, and The Pirate Bay continues to live on in the hundreds of proxies and various other TLDs that the website can be accessed from.