This week in Science is a review of the most interesting scientific achievements and discussions of the week.

Following last week’s announcement of the first-time creation of atomic metallic hydrogen by Ranga Dias and Isaac Silvera, from Harvard University, more experts are expressing their doubts about the achievement, according to Nature's news team. Paul Loubeyre, a physicist at France’s Atomic Energy Commission in Bruyères-le-Châtel, who voiced his concerns last week, was joined by geophysicist Alexander Goncharov of the Carnegie Institution for Science in Washington DC:

“It’s far from clear that the shiny material the researchers see is actually hydrogen.”

Also, Eugene Gregoryanz, a physicist at the University of Edinburgh, UK, has said the researchers should have taken more detailed measurements of their sample at the highest pressure. This would help to make sure how the pressure changed during the experiment. But Silvera still defends the early publication:

“We wanted to publish this breakthrough event on this sample. Now that the paper has been accepted, we’re going to do further experiments.”

Dutch and Israeli researchers from the Eindhoven University of Technology and the Weizmann Institute have surpassed another great obstacle for the use of photoelectrochemical cells (PECs). Those cells are responsible for absorbing sunlight and driving water-splitting reactions, from which hydrogen is generated and can be used as fuel.

This new achievement, published on the Journal of the American Chemical Society, follows last week’s advancements on PECs and may help to create a reliable technology for water-splitting by solar energy. The team of researchers is working to improve the efficiency of the hydrogen production. 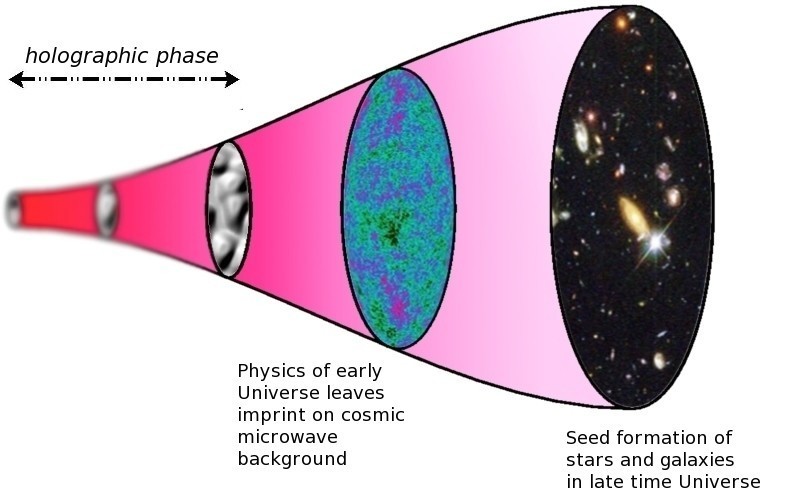 We may indeed live inside a vast and complex hologram, according to a publication on the renowned journal Physical Review Letters by a collaboration of theoretical physicist and astrophysicist researchers. They have found substantial evidence of a holographic explanation of the universe while studying irregularities in the cosmic microwave background.

As explained by Professor Kostas Skenderis of Mathematical Sciences at the University of Southampton:

"Imagine that everything you see, feel and hear in three dimensions (and your perception of time) in fact emanates from a flat two-dimensional field. The idea is similar to that of ordinary holograms where a three-dimensional image is encoded in a two-dimensional surface, such as in the hologram on a credit card. However, this time, the entire universe is encoded."

To achieve the results, the team used information from the microwaves pertaining to the cosmic background, a leftover from the moment the universe was created. By applying some of the simplest quantum field theories, they could explain almost everything from that dataset. As stated by Professor Skenderis:

“Scientists have been working for decades to combine Einstein's theory of gravity and quantum theory. Some believe the concept of a holographic universe has the potential to reconcile the two. I hope our research takes us another step towards this.”

Neuroscience may soon become a tool for the development of software interfaces, according to Anthony Vance, an associate professor at Brigham Young University. The researcher, who attended this week’s Enigma security conference in Oakland, California, has affirmed that “security professionals need to worry not only about attackers but the neurobiology of their users.”

By using functional MRI scans of people’s brains, the researcher and his team could study the unconscious mechanisms behind users' actions when they ignore security warnings. In a collaboration with Google, they were able to show multitasking is part of the problem. That’s because while performing multiple tasks, the users' brain activity in areas associated with reacting to warnings was reduced and the users were up to three times less responsive to the security messages. As stated by Vance:

“Our security UI should be designed to be compatible with the way our brains work.”

Furthermore, Vance and his team have shown the brain gets accustomed to security warnings with a marked decrease in the brain's response on the second encounter of an error message. Finally, Vance has stated the Google Chrome team would implement some of the research findings in a future version of the browser, but Google did not confirm it yet.

Another neuroscience breakthrough was covered by Neowin’s Paul Hill this week. Scientists have developed a new technique that allows patients that suffer from advanced forms of amyotrophic lateral sclerosis to communicate by answering "yes" or "no".

Patients in that condition are completely unable to move and even to blink their eyes. So the scientists have used near-infrared spectroscopy to evaluate the patient’s blood color, which is affected by the levels of oxygen in it and, therefore, by the brain cells’ activity. By testing the method with reliable questions, such as the patient's birthplace or name, it was possible to verify its accuracy.