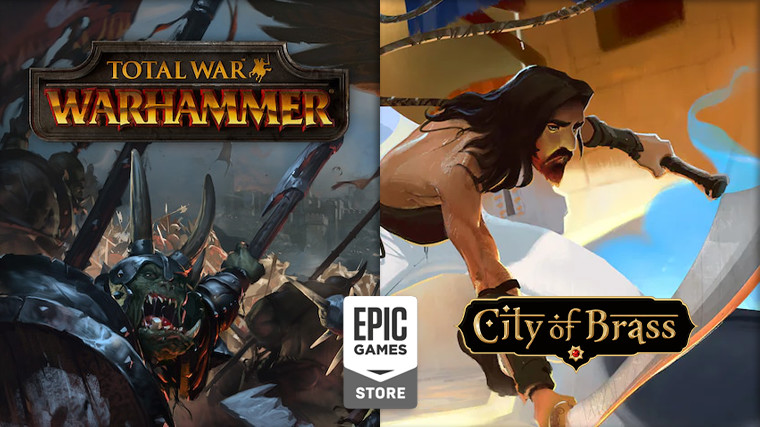 It is time for another high-profile giveaway week from the Epic Games Store. Replacing Demon's Tilt from last week, the store has put forth a double promotion that gets you copies of Total War: Warhammer and City of Brass.

2016's Total War: Warhammer marked the start of the strategy trilogy by Creative Assembly where you build and expand your empire in the 4X-like over world while also taking full control of battles with thousands of troops and monsters clashing for victory.

Here's how the store page describes the setting:

Command five wholly different races: Bretonnia, the Empire, the Dwarfs, the Vampire Counts and the Greenskins, each with their own unique characters, battlefield units and play style. Lead your forces to war with powerful Legendary Lords from the Warhammer Fantasy Battles World, arming them with fabled weapons, armour and deadly battle magic; hard-won in individual quest chains.

City of Brass by Uppercut Games is an indie project by former 2K Australia staff who worked on the BioShock franchise. The title is a rogue-lite dungeon crawler where you explore and fight through a city themed-after the Arabian Nights folk tales. The environment is also procedurally generated, so no two runs will be the same.

The gameplay loop is described as follows by the developer:

The rhythmic interplay between sword and whip is carefully tuned along with sprinting, crouching, sliding, leaping and vaulting to give a fluid, balanced and natural feel to the movement and melee. Eternal replayability is granted by a design that encourages combinative gameplay within an ever-changing but logical procedurally generated world.

When not on sale, the Warhammer title costs $59.99 while City of Brass comes in at $19.99. Here are the minimum system requirements for playing the two:

The Total War: Warhammer and City of Brass giveaways will be available for a week, ending next Thursday, April 7. Coming up next as the freebies are copies of The Vanishing of Ethan Carter and Rogue Legacy.