According to the official figures by the IDC, there were 3.1 trillion pages printed globally in 2010. This statistic means that world printing output was 100,000 pages per second which is fast for any printer. Three billion pages a day are printed across Europe, the Middle East, and Africa – meaning that this region accounts for %33 of the total printing output across the world. These are staggering numbers and this infographic visualises the worldwide page volume in a number of different ways. 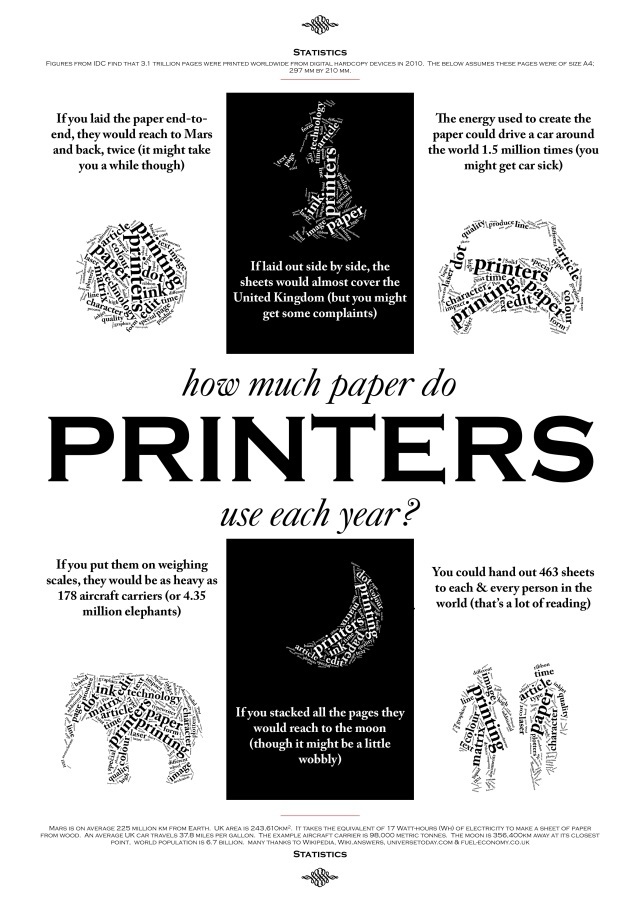 For instance, did you know that if you stacked all the pages printed in the world in 2010 in one giant stack, they would reach to the moon? That’s 356,400 kilometers – the distance between the moon and earth at its closest point. And, if you laid each piece of printed paper end-to-end, the path would extend to Mars and back – twice. These figures all are normalised for A4 paper, with measurements of 297 mm by 210 mm.

Business and personal printing is changing. The greatest growth is happening in developing markets, with double-digit growth in Central and Eastern Europe, Latin America, the Middle East, and Africa. In contrast, printing output decreased slightly in western European countries, showing a one percent decline.

Across the world, sixty-four percent of all printing devices are inkjet, but far fewer pages are printed on them, proportionately, because a significant amount of inkjet printers are used in households or in smaller companies, where the average total output is low – much lower than it would be in a larger business.

The IDC estimates that 1.1 trillion pages were printed on laser printers worldwide in 2010, a slight increase over the previous year. Colour laser printing is increasing, with page volume growing 11 percent year over year. People do more printing on the laser devices too, with 49 percent of total pages printed on laser A3 devices even though these laser A3 devices only make up 14 percent of the worldwide total. As we saw above, companies and private individuals that use laser A3 devices are likely to have a much higher need for printing than the owners of inkjet printers.