Amazon's live streaming service, Twitch, kicked off this year's edition of its TwitchCon event today, and the opening keynote included a number of announcements. These include new features to help streamers 'grow, connect, and thrive' by giving them more ways to engage and interact with their communities.

In the 'grow' category, Twitch announced that creators will now be able to partner up in live co-streams with up to four people. This sounds somewhat similar to what Microsoft's Mixer announced last year, but it works differently in some ways. For example, chat rooms are separated for each of the participating channels of the stream, while Mixer merged them all in a single chat experience. This will be available later this year for select streamers, and general availability wasn't mentioned.

Content creators will also be able to showcase highlights from their videos with the new Highlight Editor. This will allow them to choose the best moments from a video and put them in a single shorter video, and it will be rolling out in January 2019.

Lastly, Twitch is also re-organizing its homepage with new features sections. These include sections for on-the-rise streamers, partners and affiliates, and creators that are in the same region as the viewer. 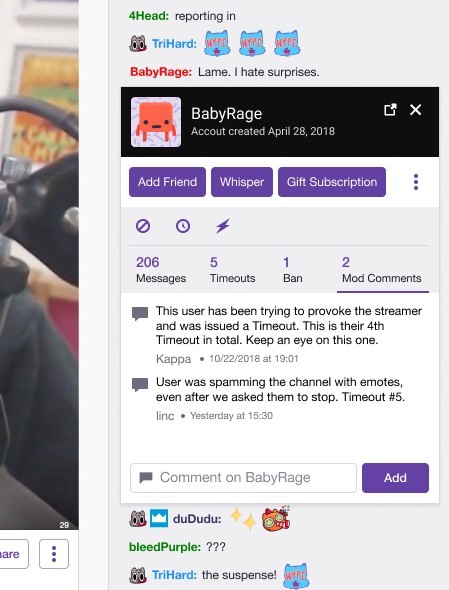 Moderators are also getting new tools to help them keep communities clean. They'll be able to see information about a community member's profile, included how many times they've been on timeout or banned, and there's also a section for moderator comments so that they can help each other keep an eye on troublesome users. And channel supporters can now brag about how long they've been subscribed to a channel with new badges that indicate the total number of months they've subscribed to it, rather than just the number of consecutive months. These new tools arrive in January of next year.

Twitch is also working with a number of partners including Adobe and Spotify to bring more extensions to its platform. The most notable example is the Snap Camera app announced earlier today, which integrates nicely with the streaming service and even offers exclusive Lenses for streamers.

Lastly, to help streamers 'thrive', Twitch is opening up its Bounty Board to 30 more brands next month, enabling partners in the U.S. and Canada to earn more money on the service. Next year, Bounty Board will expand even further by going to other countries as well, starting with the UK.

Aside from these new tools, there's a whole new experience coming to Amazon's live streaming service in the form of Twitch Sings. This is a karaoke-like experience where creators can sing for and with their community. The chat can be used to request specific songs or suggest challenges the streamer could try to undertake. The experience is being tested at TwitchCon 2018, and you can also sign up to test the experience using this page.