Twitter is reportedly rolling out one of the most requested features to some of its users– scheduling tweets. The feature is really helpful for all types of Twitter users and has been present in clients such as Tweetdeck.

The Next Web recently published some Twitter screenshots that show tweet scheduling in action. The feature will allow users to schedule tweets for a specific date and time. Twitter has also added a scheduled section that will allow you to manage all the scheduled tweets. 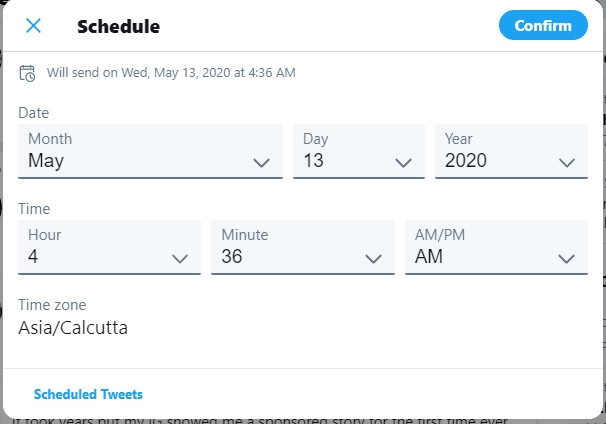 Last year, the company ran an experiment with the scheduler in the composer window but this time around, it has added a dedicated button for the feature. The firm has been testing features lately including threaded replies and warnings for people who use foul language on the platform.

It is not clear if the new feature is a part of the next feature roll out or if Twitter is just experimenting to test the waters. If you cannot see the feature on the desktop client yet, then you might not be in the list of users targeted for the rollout. In the meantime, you can use TweetDeck to schedule your tweets.