Twitter's experimental feature designed to allow you to choose who can reply to your tweet is now rolling out to its iOS app and web version. The capability has been in testing since May, though it was available only to a limited group of users.

Today's update makes that feature available to everyone. On iOS, the Twitter app's listing indicates that you can now limit the people who can reply to your posts. The update bumps up its version to 8.30, with the following notes:

"In May, we tested a new way to have a chat with exactly who you want, so you can create and consume more meaningful exchanges. Now, everyone can try this new feature and choose who can reply to their Tweets." 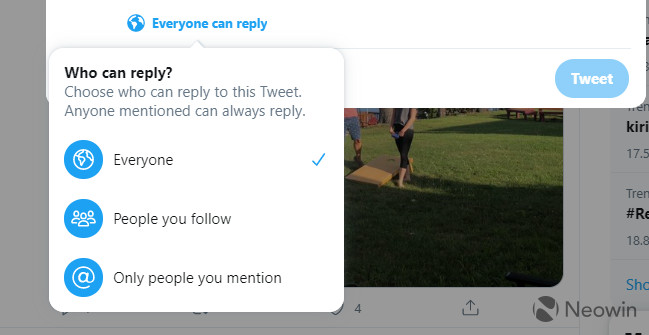 The feature is also live on Twitter's web version. There are three types of audiences whom you can allow to reply to your tweet: everyone, people you follow, and people you mention. The option to set that restriction will appear when you click on the compose button.

For now, it looks like the capability is not available on Android. That said, your tweet will still be visible to everyone, of course, regardless of who you choose can reply to it. Also, the reply restrictions do not apply to likes and retweets, but it can limit the types of conversations on the platform to some extent.