UK's advertisements regulatory body, the Advertising Standards Authority (ASA), has released a statement today summarizing the action it has taken against an ad for a product called "Eradicator19+" by a small company called Go-Vi Limited. The body believes the ad was misleading and so has decided to ban it. Of course, the product could still be advertised, but not in the same manner.

The ad claims that Eradicator19+, an air-purifier, has been "Proven to destroy Coronavirus* cells". The asterisk symbol used in the ad explains that Eradicator19+ works effectively on "H5N1 & Coronavirus" with an ability to produce "a reduction of 5.7 logs (99.9998%) in less than 0.44 seconds in destroying airborne H5N1 avian influenza virus." The testing was apparently conducted by CNRS, France.

You can view the ad on the product's Facebook page. (image below): 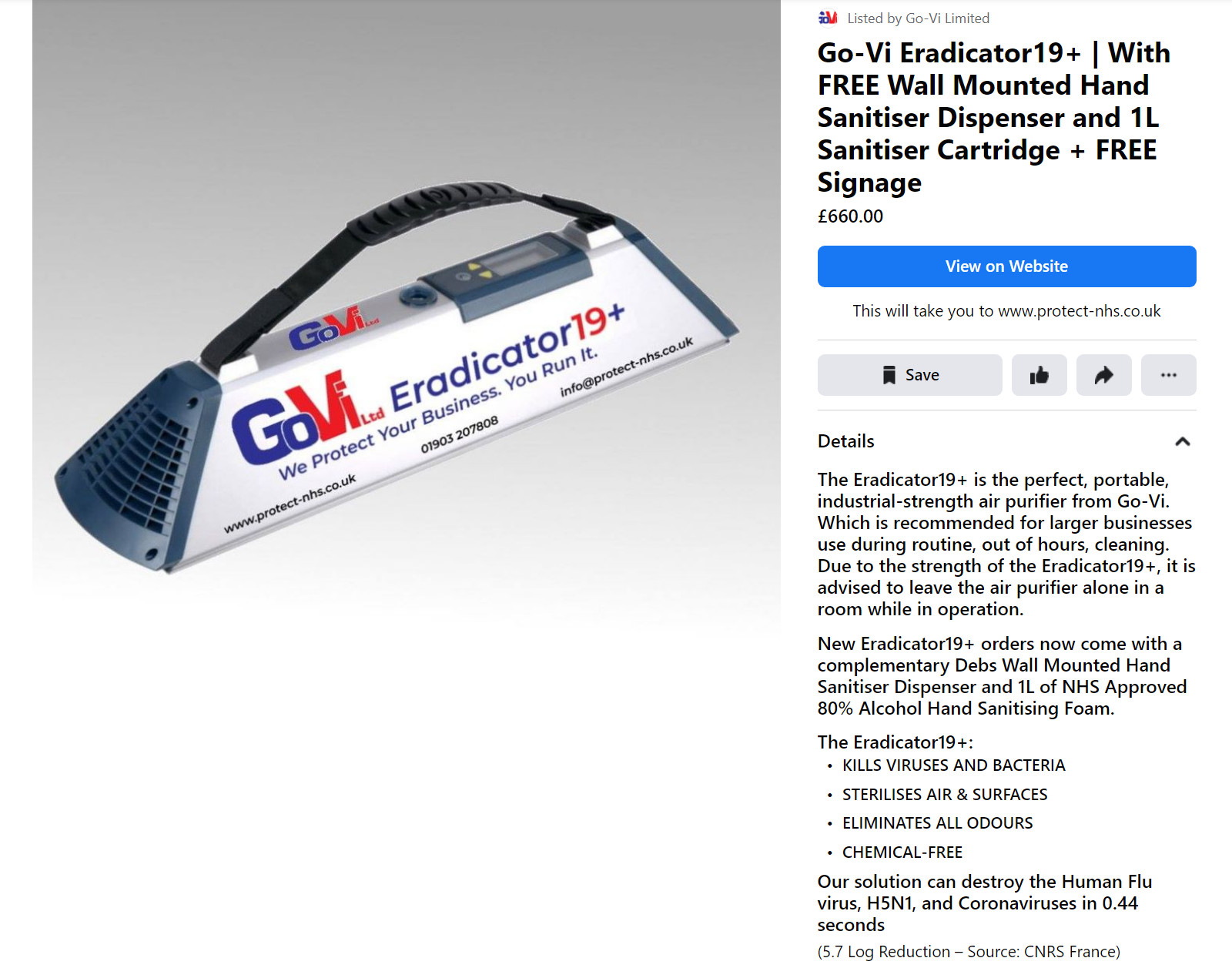 For those wondering what Go-Vi does, here's what the firm has posted about itself on Google:

We have all gone through a terrible time over the past few months. Protecting ourselves from COVID-19 as it runs rampant around the world is now a must. We want to do what we can to help that cause. We install leading sanitising equipment that has been tried and tested to help prevent the spread of viruses. Our products range from the very same 80% Alcohol-based hand sanitiser that is used by the NHS, to the UKs only air purification system that has been proven to destroy SARS-CoV-2 cells. The coronavirus that caused COVID-19. We are proud to support NHS Charities Together and continue to donate 10% of the costs of installing our managed hand sanitising stations.

When questioned about the claims made about Eradicator19+, Go-Vi said that the air purifier would draw in air and kill COVID-19 as well as other viruses with the help of ultra-violet C-radiation (UVC) light and Ozone. And while the ASA acknowledged this as something definitely conceivable, unfortunately, the body found no evidence of actual lab-testing of the COVID-19 virus itself. The results were based on other similar viruses. So the claim, like the one written on Google (above), that its air purifier can "destroy SARS-CoV-2 cells" has been found to be misleading.

The ASA was not satisfied with the methodology of testing either. In the labs, the virus would be placed on glass carriers at a 12-inch distance from the air purifier. And while the purifier did its job, the ASA pointed out that this test wasn't a true simulation of real life.

Hence the ASA has found the ad to violate two of CAP Code (Edition 12) rules, no. 3.1 (Misleading Advertising), and no. 3.7 (Substantiation) which has led to this ad getting banned. You can read more about the ruling in the official press release here.