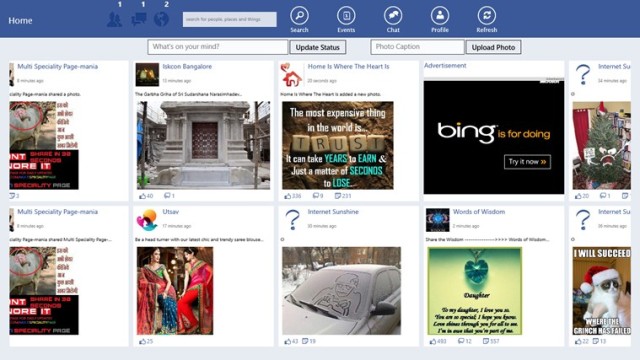 It's been the question that Windows 8 and Windows RT owners have been asking for a while now: "Will there be an official Facebook app?". In the past, Microsoft has directed all these questions to Facebook itself, but Facebook has turned around and said inquiries should be given to Microsoft on this issue.

Today, a new app appeared in the Windows Store that has the title "Facebook" with the official logo of the social networking service. However, when users check the actual listing for this app, they may be disappointed. It's actually from a developer called Pearl Apps LLC. In their description they state, "This is not the official Facebook App. We are not affiliated with Facebook in any way."

The app itself is actually not bad at all; it allows people to look through their Facebook news feed, comment on posts and more. However, the fact is that even with the disclaimer, this app is flat out titled "Facebook" and it is using logos that have been trademarked by that company. There's also the question of why Microsoft would allow this app to be approved for the Windows Store with this title and logo.

We have emailed Facebook to see if they wish to comment on this unofficial Windows 8 app that is using its name and logo. We have also emailed Microsoft to find out why this app passed the Windows Store certification process.