As part of an initiative by the American Department of Homeland Security’s ICE project, multiple web domains were taken down this week that are accused of hosting child pornography and counterfeit goods or linking to sites that host them. However, according to Torrentfreak, one of the websites taken down was a free DNS provider that serviced upwards of 84,000 subdomains not accused of any crimes. Visitors to these sites were greeted by the ever so friendly banner of ICE that declares the site seized by the government pursuant to a seizure warrant. Needless to say, it’s quite embarrassing to have your visitors see this on your homepage, and many are blaming the DHS for this apparent screw-up. 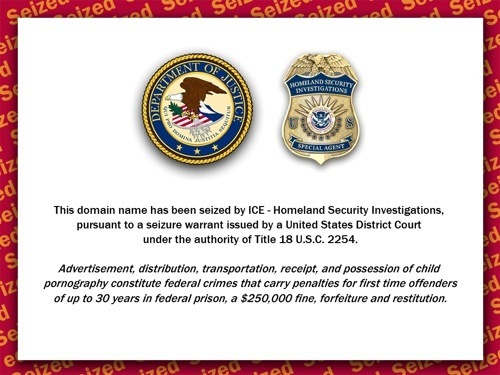 FreeDNS, the DNS host claiming that it was wrongfully taken down, immediately posted on their website,

“Freedns.afraid.org has never allowed this type of abuse of its DNS service. We are working to get the issue sorted as quickly as possible.”

It took 3 days before service was fully restored to all affected sites, and DHS has yet to admit their error. In a press release this morning, they failed to mention the faux pas, and decided to focus only on the guilty parties that were successfully seized. While the idea of shutting down nefarious websites is a noble one, many are accusing the US government of refusing rightful due process. Being accused of hosting child pornography is no small matter, and the fact that the charges were wrongful doesn’t erase the humiliation that a public facing website has to deal with when of accused of such crimes. In a world of digital reputation, mistakes like these are hard to overcome.