Kurt Eichenwald is a writer for Vanity Fair, Newsweek and is a New York Times bestselling author. He has 231,000 followers on Twitter, and just so happens to be an outspoken critic of US President-Elect Donald Trump.

Being an outspoken critic of anything or anyone of course comes with caveats that include criticism of your views and the possibility of personal criticism or attack. However, the attack in this case is quite unique, because it took place on twitter and had a direct physical health-related impact.

An anonymous Twitter user with knowledge of Eichenwald's epilepsy appeared to have crafted a GIF which was designed to trigger his condition, with the words 'You deserve a seizure for your posts' at the forefront of the flashing image. 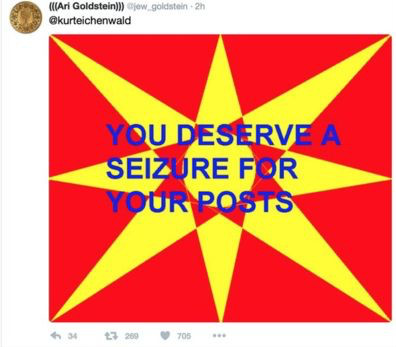 Shortly after the tweet was received, Eichenwald's wife tweeted that he had had a seizure, and he later confirmed in a series of tweets that he would be taking a break from twitter and pursuing legal action against the individual who sent the image.

Last night, for the second time, a deplorable aware I have epilepsy tweeted a strobe at me with the message "you deserve a seizure' on it...

Eichenwald goes on to clarify that the tweet worked, and that his wife was terrified. Apparently the police are investigating whether the attack is federal crime as it potentially crosses state boundaries.

Stefano Seri of Aston University, a professor of clinical neurophysiology and developmental neuropsychiatry, had the following advice for anyone affected by epilepsy who is concerned about the incident:

"You should sit far enough from the stimulus so it doesn't fill your vision and watch in a sufficiently lit room so the impact of any flashes is lessened," the professor advised.

"In a well lit room your baseline is higher, so changes are less dramatic. Don't open attachments from people you don't know."

The notion of an attack on Twitter causing physical (rather than mental) distress is relatively new. Tweets inspiring hate or violence are sadly commonplace, but a targeted attack on an epilepsy sufferer is a serious, even potentially fatal, escalation.