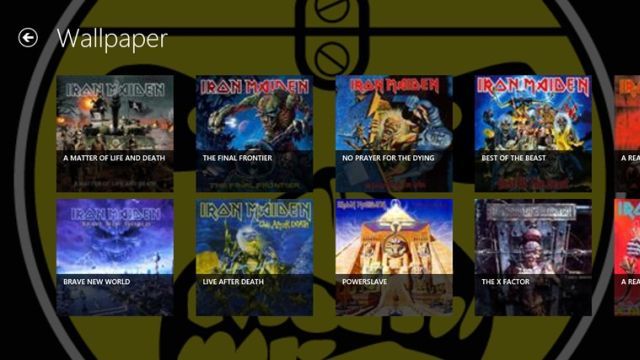 For our first such feature, we turn to the metal music genre. Specifically we turn to the Windows 8 app known simply as Iron Maiden Fan. The UK metal rock band was first formed in 1975 and has stayed together, through a number of incarnations, ever since. It has released 15 studio albums and have sold a whopping 85 million total copies.

The free Iron Maiden Fan Windows 8 app looks like it was quickly made by one of the band's many fans. It's merely a collection of artwork from the band's various album covers, but that's actually kind of OK. The band has some of the most imaginative and graphic covers of any musical act ever. All of the band's album covers include their famous mascot, Eddie, a zombie like creature that is at times scary but also kind of heroic.

The Windows 8 app page shows that the creators of this app are Belfast-based JamPot Technologies. It was made using the company's TheAppBuilder service, which recently launched Windows 8 support for people who want to quickly make their own mobile and PC apps without a lot of fuss.

We plan on covering a weird but fun Windows 8 app every day, so be on the lookout for more unique titles!