In many parts of the world, Microsoft's share of the smartphone market is steadily growing, with Windows Phone now enjoying double-digit share in some countries. However, the company's global market share is still only around 3-4%, while Android continues to dominate with over 80% of the market.

To answer that question, AdDuplex studied data from 11 apps and games worldwide that served up its ads to users on one day - July 8, 2014. These apps were chosen to represent a truly "global" audience, with a total of 200,000 ads served to them during that 24-hour period, helping the company to build up a profile of where the largest concentrations of Windows Phone users were located around the world. 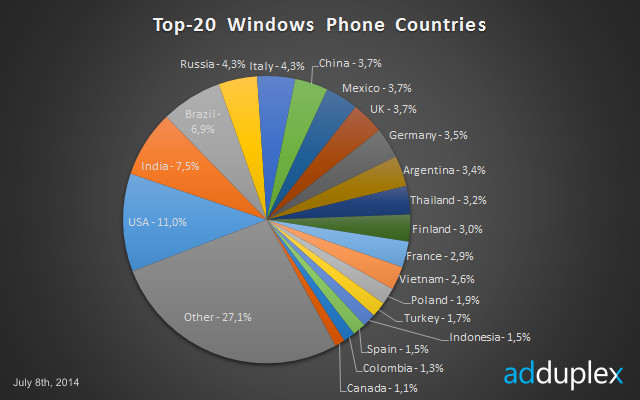 The stats show that the United States is the biggest fish in Windows Phone's little pond, with 11% of its user base. Next in line was India (7.5%), followed by Brazil (6.9%), with Italy and Russia completing the top five, each with 4.3% of the Windows Phone market. Despite its massive population, China makes up just 3.7% of Windows Phone users - equal to both Mexico and the United Kingdom.

AdDuplex does add the caveat that certain factors may affect the accuracy of the figures presented such as ad strategies on a country-by-country basis, although we have to believe that if the margin for error was too great, the company would not have published these stats at all. So while the exact percentages may be slightly off, it seems fair to assume that they are broadly representative in showing where the largest proportions of Windows Phone users are around the world.