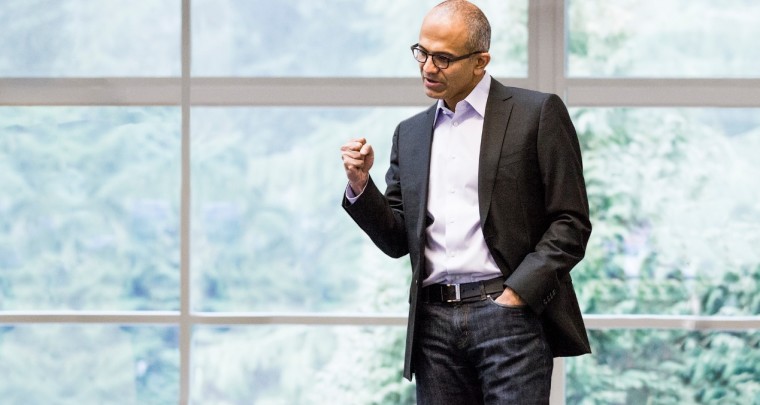 When Satya Nadella was named Microsoft's chief executive in February, he said the company would focus on innovation going forward. In an email sent to Microsoft employees today, Nadella reiterated that point, saying Microsoft will be a global leader in mobile and cloud technology.

In the email, which has also been released to the public, Nadella said that "Microsoft must find ways to simplify and move faster, more efficiently." To do that, he's tasked the company's executives with creating plans to innovate in their respective departments and business units.

"Culture change means we will do things differently," Nadella wrote. "Often people think that means everyone other than them. In reality, it means all of us taking a new approach and working together to make Microsoft better. To this end, I've asked each member of the Senior Leadership Team to evaluate opportunities to advance their innovation processes and simplify their operations and how they work. We will share more on this throughout July."

Along with his emphasis on innovation, Nadella reiterated something he said would be Microsoft's focus after he was named CEO: mobile and cloud products and services.

Noting that "people define mobile by devices," Nadella's letter states that Microsoft "defines [mobile] by experiences" and promises that the Windows developer "will be on the forefront of this innovation with a particular focus on dual users and their needs across work and life." The context of his statements seem to imply that Microsoft will create software across a variety of devices and will be not constrained by what company is making the hardware. This has been seen in recent months with Microsoft releasing Office for iPad in March, before a touch-focused version is available on its own operating systems.

"At our core, Microsoft is the productivity and platform company for the mobile-first and cloud-first world." - CEO Satya Nadella on Microsoft's focus going forward

Despite the emphasis on software, however, Nadella said Microsoft's hardware "will set the bar for productivity experiences," something the company has championed with the Surface Pro 3 and its note-taking abilities. Similarly, Microsoft will make sure Windows "will deliver the most rich and consistent user experience for digital work and life scenarios on screens of all sizes – from phones, tablets and laptops to TVs and giant 82-inch PPI boards." Additionally, he said the company will focus on universal apps to "run across all device targets."

Nadella wrote that Microsoft's hardware will "stimulate more demand for the entire Windows ecosystem," also noting that it will sometimes "develop new categories like we did with Surface," possibly hinting at its fitness-focused wearable device, which is expected to be announced in October.

While the majority of the letter focuses on Microsoft's innovation going forward in mobile- and cloud-related areas, Nadella also emphasized the importance of the Xbox brand to the company. Xbox creates "additional business value for Microsoft" and is "one of the most revered consumer brands," he wrote, putting the kibosh on any potential Xbox spinoff or sale.

Nadella's letter touts something shareholders have long wanted from Microsoft: a commitment to innovation by keeping up with technology trends. Microsoft has largely lagged behind competitors such as Apple and Google in new technology markets, but Nadella claims it will be a faster and leaner company to meet consumer interests. A large part of that, it seems, will be productivity, likely meaning Office and Azure will have significant roles in Microsoft's future.