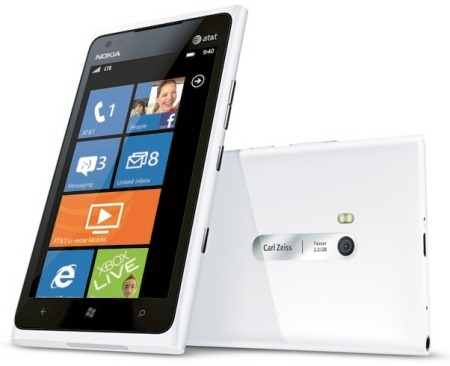 AT&T is expected to begin selling the long awaited Nokia Lumia 900 smartphone in its stores on April 8th for the price of $99.99 (with a new two year contract). It's supposed to be available in both black and cyan colors on that date, but apparently AT&T is waiting a couple of weeks before adding another color choice to the mix.

Although this has yet to be officially announced from AT&T, EverythingWM.com is reporting that the wireless carrier will begin selling a white version of the Lumia 900 on April 22nd. There's no word on why AT&T is waiting nearly two weeks after the Lumia 900's general introduction to offer the white version for its customers.

As you can see in the photo, the white Lumia 900 looks pretty slick. We are sure that at least some people who were thinking about getting the Lumia 900 on April 8th are now reconsidering that move and might wait until April 22nd to grab the white version - although it's worth noting that the white version has a glossy finish that's absent on the cyan and black models.

As we have reported before, you can currently walk into at least some AT&T stores right now and ask to see and even operate a Lumia 900 before the Windows Phone-based device officially goes on sale.