WikiLeaks yesterday said that deceased Internet activist Aaron Swartz assisted them, was in contact with Julian Assange and they also strongly believe Swartz was a source for the organisation however they cannot prove this. 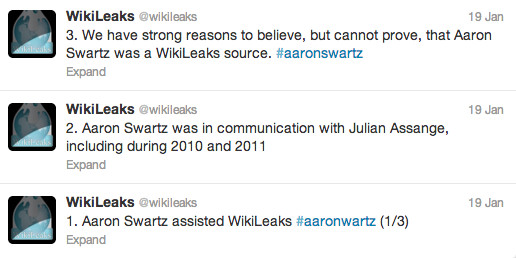 WikiLeaks representative Kristinn Hrafnsson confirmed with CNET that the tweets from the WikiLeaks Twitter account were genuine but declined to elaborate on the content. WikiLeaks said that they revealed the information "due to the investigation into the Secret Service involvement" with Swartz.

Swartz is allegedly to have been guilty of unauthorised access to protected computers, which the Secret Service has a legal mandate to investigate. It would be likely that they would be involved in the criminal probe of Swartz alleged crimes. Tim Carmody of The Verge is led to believe that these tweets could imply that the Secret Service and US Attorney's Office targeted Swartz in order to get at WikiLeaks, with Swartz dying still defending his contacts' anonymity. Whatever the actual reason WikiLeaks decided to publish the tweets, it's very likely to fan the flames of the situation even further.