How does a gaming tablet, with a removable gamepad for a console experience, sound?  Wikipad the company are developing just that; a gaming tablet of the same name. 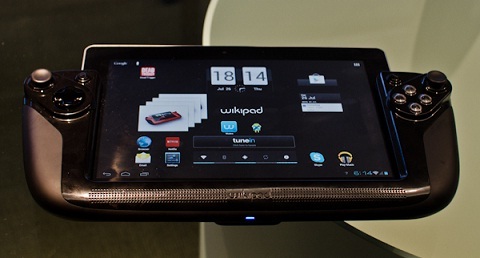 The Wikipad (tablet, not company) has been confirmed to have the following specs:

Fraser Townley, President of Sales at Wikipad, commented that the storage in the device has not been finalised and added “we will not go down, we will only go up.”

The device itself will measure 8.6mm in thickness and weigh only 560 grams. For comparison, the iPad is a full 40 grams heavier.

The proprietary controller add-on will come bundled with the device, featuring two sets of triggers, analogue sticks and bumpers, in addition to a D-Pad, four face buttons and Start and Select, all very standard for gaming controllers nowadays. Audio performance will be maintained as the controller allows the sound to travel through acoustic tubes and out its front grill. Comparisons have been made with the Xbox 360 controller, but combining the controller and tablet shows the device styling is more in line with the Wii U controller. Neowin previously reported on the revised Wii U controller after it’s reveal at E3 this year.

Future designs of the tablet may ship with a 3D screen, as shown off by Wikipad at CES. With no released date or price confirmed, the tablet is expected to hit before the end of the year, according to Wikipad President James Bower.

Competition between tablets is fierce, but with the release of Google’s Nexus 7 at an attractive price point, it remains to be seen if the Wikipad can offer the performance, features and price to make it stand out in an already crowded market.