Microsoft is looking to promote its Xbox Live Rewards program as well as a number of free console titles with a new FREEdom Rewards event. Those participating can win prizes and discounts by playing games with friends or spending money on downloadable add-ons.

The biggest prize that could be yours is the one for the Roblox title, whose total retail value hits the $1,500 mark. That’s because, if you play Roblox between now and the end of February, you could win a 49-inch 4K Ultra HD TV from Samsung. Other prizes include a wireless gaming chair, a gaming headset, and packs of in-game currency. To participate, you need to sign into the Xbox Live Rewards program, download the game and play. For every 30 minutes of playtime you get one extra chance to win, up to four entries per week. 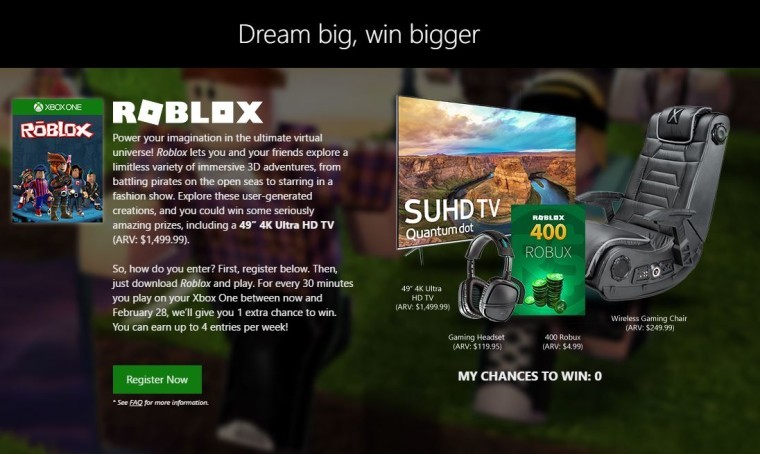 If Roblox isn’t your cup of tea however, there are other titles that can net you some discounts and prizes. Refer your friends to play Neverwinter, World of Tanks, Star Trek Online or DC Universe Online and with each referral you can get some in-game prizes worth between $5 and $10.

If you’re a fan of Warframe you can get 75 Platinum, which is the game’s currency, to spend if you complete five achievements before the end of next month.

Finally, if none of these titles appeal to you, you can also enjoy rewards for spending a minimum of $5 before tax in-game, on any free to play title from the Xbox Store.

Unfortunately, the Xbox Live Rewards program isn’t open to all, and eligibility depends on your location so you’ll need to check that before pestering your friends to play with you.