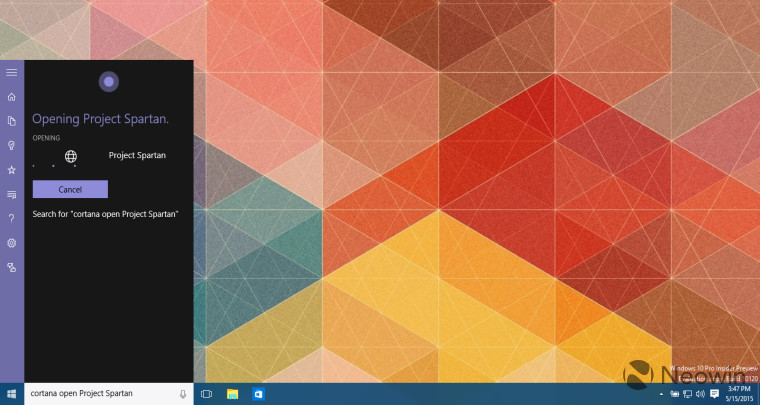 At Build and Ignite, Microsoft showed of new features for Spartan that were not yet working with Insider builds. Seeing as I got my hands on build 10120, I tried using my voice to open an app, and it works.

By saying "Hey Cortana, open Spartan", the app will open. This feature appears to work well with all of the Windows applications: I tested it with Internet Explorer, File Explorer, Alarms and Clock, they all worked without any issue.

If you look at the image above, when Cortana does open an app, you do have a few seconds to cancel the function in the event the wrong app is selected.

I tried to send an email too but Cortana says "I cant send email on this device" and the same goes for sending a text or mms as well.

If you want to try this feature out, it also works on the latest Insider build for Windows 10 Mobile. The interface is exactly the same but on the phone, you can send a text or mms this way too.

This is one small feature for Cortana but is another step towards RTM for Windows 10. If you missed it earlier today, Cortana received a couple other new features as well, including daily trivia and riddles.