Windows 8 is going to be used by a lot of people when it is officially released later this year. That includes users that might have one or more physical disabilities. In the newest entry on the official Windows 8 developers blog site, Microsoft's Jennifer Norberg, the lead program manager for the Human Interaction Platform team, writes about the kinds of accessibly features that will be included in the company's next PC operating system.

Norberg first writes about how Microsoft has added accessibly features to previous products, including Magnifier to increase the size of text and graphics for people who have low vision, and Narrator which allows users with visual impairments to continue to work with applications. For Windows 8, Microsoft has added improvements to Narrator feature. The improvements include reading out what a user selects more quickly and adding more languages and voices. 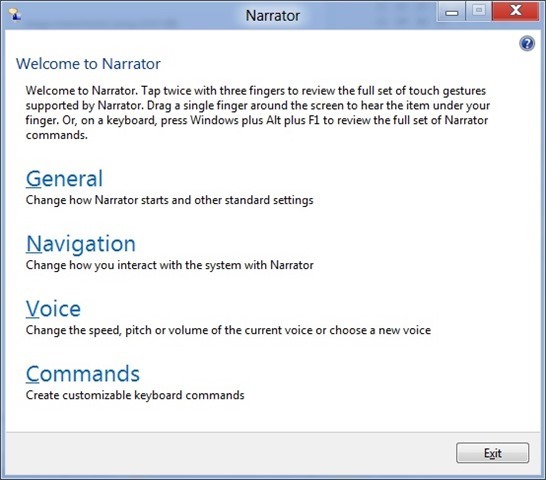 Even installing Windows 8 is easier using Navigator. Users with a Windows 7 PC can use their own version of Narrator to quickly download and set up Windows 8. Norberg writes:

Right out-of-the-box with a new Windows 8 tablet, you will be able to press the Windows logo key and Volume Up to launch Narrator and walk through the setup of your machine. Whether you’re blind, have low vision, or are fully sighted, you’ll be able to start experiencing a Windows 8 tablet from the moment you get it.

Windows 8 will also use Narrators improvements to allow users to explore text on a web page via Narrator and Internet Explorer.

Metro is Windows 8's new touch screen user interface and Norberg says that Microsoft wanted users with disabilities to begin using Windows 8 via the Metro UI out of the box. She states:

As a start, we updated our accessibility foundation with support for industry standards. By supporting standards from the Web Accessibility Initiative, Accessible Rich Internet Applications (ARIA), HTML5, and XAML, it is easier for developers to code accessibility into their applications and for the ATs using UI Automation to consume the information that makes accessibility scenarios work on Windows 8.

App developers for Windows 8 Metro interface can make their programs more accessible using existing standards. They can also test them via the Windows SDK tools to make sure they have features such as Narrator support, High Contrast mode and more. When they are ready to sell their apps via the Windows Store, app developers can label their programs as accessible which should allow users with disabilities to quickly find and use the app. 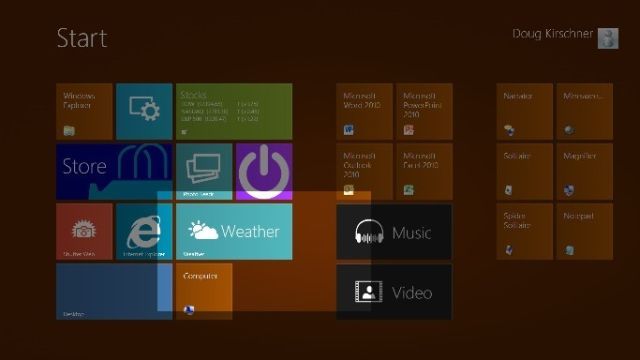 For Windows 8-based touch screen devices like tablets, Microsoft is developing a new version of Magnifier. Norberg writes:

When you start Magnifier on a touch-enabled device (in the Ease of Access panel, set Magnifier to start when you press the Windows logo key + Volume up), you will immediately notice a border that appears around the edges of the screen. We know you will need to access all areas of the screen, so we made it easy to move the Magnifier around the screen using these borders. Simply drag your finger along the border to move Magnifier in that direction. When the border disappears, you are at the edge of the screen.

The plus and minus buttons lets users zoom in and out of the Windows 8 Metro interface via Magnifier. If you want to see where you are in relation to the entire touch screen, Magnifier also has a feature to handle that by "tapping with a thumb or finger on opposite borders at the same time."

Narrator on Windows 8 touch devices can also be accessed via "holding down the Windows logo key and pressing the Volume Up button." For user who are blind, Narrator will allow them to move their finger on the touch screen while Narrator states which app or section they are touching. To activate an app or section the user can tap the screen with a second finger.

Microsoft is also working with third party companies who are developing other software programs to add users with disabilities. Microsoft admits that it is still developing a number of these features and will continue to improve and add to them in future builds before Windows 8 is officially launched.