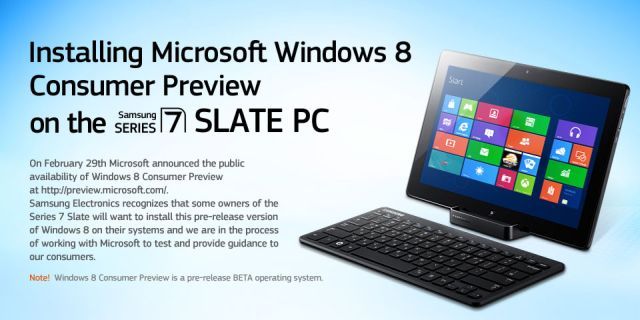 The Windows 8 Consumer Preview version was launched without any official support from Microsoft, as is the case with most pre-release software products. Most PC makers don't really make much of an effort to provide their customers with help in installing any pre-release software, especially a new operating system. However, the folks at Samsung seem to be an exception to this rule.

The Next at Microsoft blog pointed us to a page on Samsung's official website that is dedicated to offering some help for users of Samsung's Series 7 Slate PC who want to install and use the Consumer Preview version of Windows 8.  Samsung announced back in September that the Series 7 Slate would be one of the first PCs that would support an upgrade from Windows 7 to Windows 8.

Samsung's page does say that upgrading the Series 7 Slate to the Consumer Preview version of Windows 8 is not officially supported by the company so if something goes wrong, don't bother calling customer service. Having said that, the page does offers up some PDF documents for installing the Consumer Preview build on the PC along with a document to help with backup and restore procedures. There's also a configuration tool available for download for the PC's touch screen and 32-bit and 64-bit versions of the Windows 8 Rotation Sensor Driver via ST Micro.