It appears as though the Windows 8 may include some filesystem changes after years of sticking with NTFS as the standard go-to filesystem. Discovered by ITWorld’s Sando Villinger, early builds of Windows 8 include a new filesystem driver codenamed “Protogon.”

I've also dug up traces of some underlying file system changes that I couldn't quite make sense of, such as an entirely new file system driver called "NT Protogon FS driver", which looks like a kernel mode driver for some sort of (yet unknown) file system called Protogon. It's unclear, whether this is a major new file system or just some minor subsystem.

It is unknown whether or not this new filesystem will end up replacing NTFS in the final builds of Windows 8, but “Protogon” is certainly there in the early builds that have been circulating. When Mary Jo Foley talked with Rafael Rivera about Protogon he discovered “it seems to incorporate database-like concepts like transactions, cursors, rows and tables” along with hints that it could emulate or replace NTFS altogether. Microsoft has attempted to introduce a new filesystem before but ultimately scrapped the project – WinFS was supposed to be included with Windows Vista; however it never saw any implementation into the operating system. 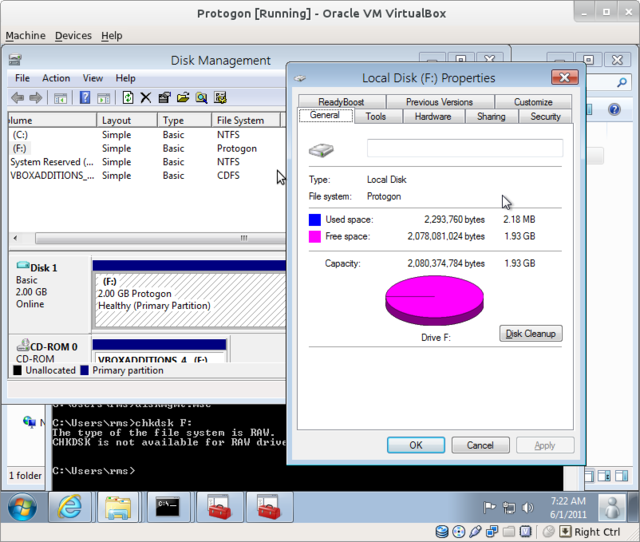 Also interesting to note is that, as shown with the above screenshot, despite Windows 8 being able to recognize a drive as using the Protogon file system, it seems the Command Prompt chkdsk function has yet to be updated to support it, instead showing the drive as being RAW formatted. Clearly Protogon is in the very early development stages and certainly not ready for Windows prime time.

Image credit: BetaArchive | Thanks to Mephistopheles for the tip via IRC