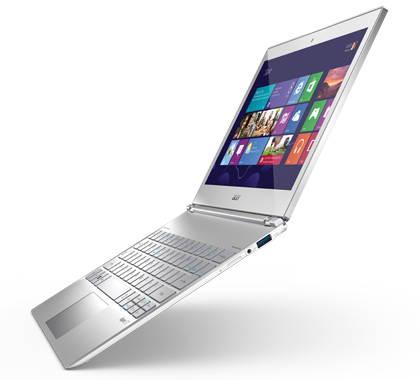 Acer may not like Microsoft's decision to come out with the Surface tablet, but that doesn't mean that the PC maker doesn't like what Microsoft has created in Windows 8. At a press event on Wednesday in New York City, we got a chance to, very briefly, check out Acer's Windows 8 products and if you are a person who just wants a thin and light notebook, Acer seems to have you covered.

The two products we were most impressed with in Acer's press room were the Aspire S7 Ultrabooks. The company is coming out with two models, an 11-inch and an 13-inch, and they both naturally have touch screen support, However, we were most impressed with the fact that both Aspire S7 models were not only very thin but costructed very well, with an aluminum body for the 11 inch model and Gorilla Glass 2 for the 13 inch version.

The 13-inch version also allows the screen to lay flat on a tablet, giving it a tablet-like appearance while at the same time not turning the Aspire S7 into an actual hybrid device. We like the idea of having the touch screen in use by someone else while we also can still access the keyboard.

Yes, these models are expensive (they start at $1,199 for the 11 inch version and go on from there) but if you have the cash and want to get a pure Ultrabook for the road, we can't imagine not considering the S7 Aspire products. We hope to get a more detailed hands-on look in the near future.

We also saw some other upcoming Acer Windows 8 models, including tablets (with optional keyboard and docks) that look like they could fit the bill nicely. Again, our time Wednesday was limited but we hope to get more hands-on with these products in the very near future.